Members of the national cast of ALI TO KARIM chronicle their theatrical escapades and provide a behind-the-scenes view of the 2008 USA tour. They share their thoughts and experiences, and discuss the people they meet and places that they visit.

Members of the national cast of ALI TO KARIM, Noren, Areebah, Salman, and Adil, chronicle their theatrical escapades and provide a behind-the-scenes view of the 2008 USA tour. They share their thoughts and experiences, and discuss the people they meet and places that they visit. In particular they talk about the core company from England, Damien, Kirsten, Dina, Duncan, Guy and Payam, their director Hafiz, producers Salima and Khaleed, and stage managers Martha and Jason.

Dallas has been quite a roller coaster! We had three days to bring on board a new cast member, Asif – who replaced Salman – and two local kids. They are learning in that time what we learned in three weeks! 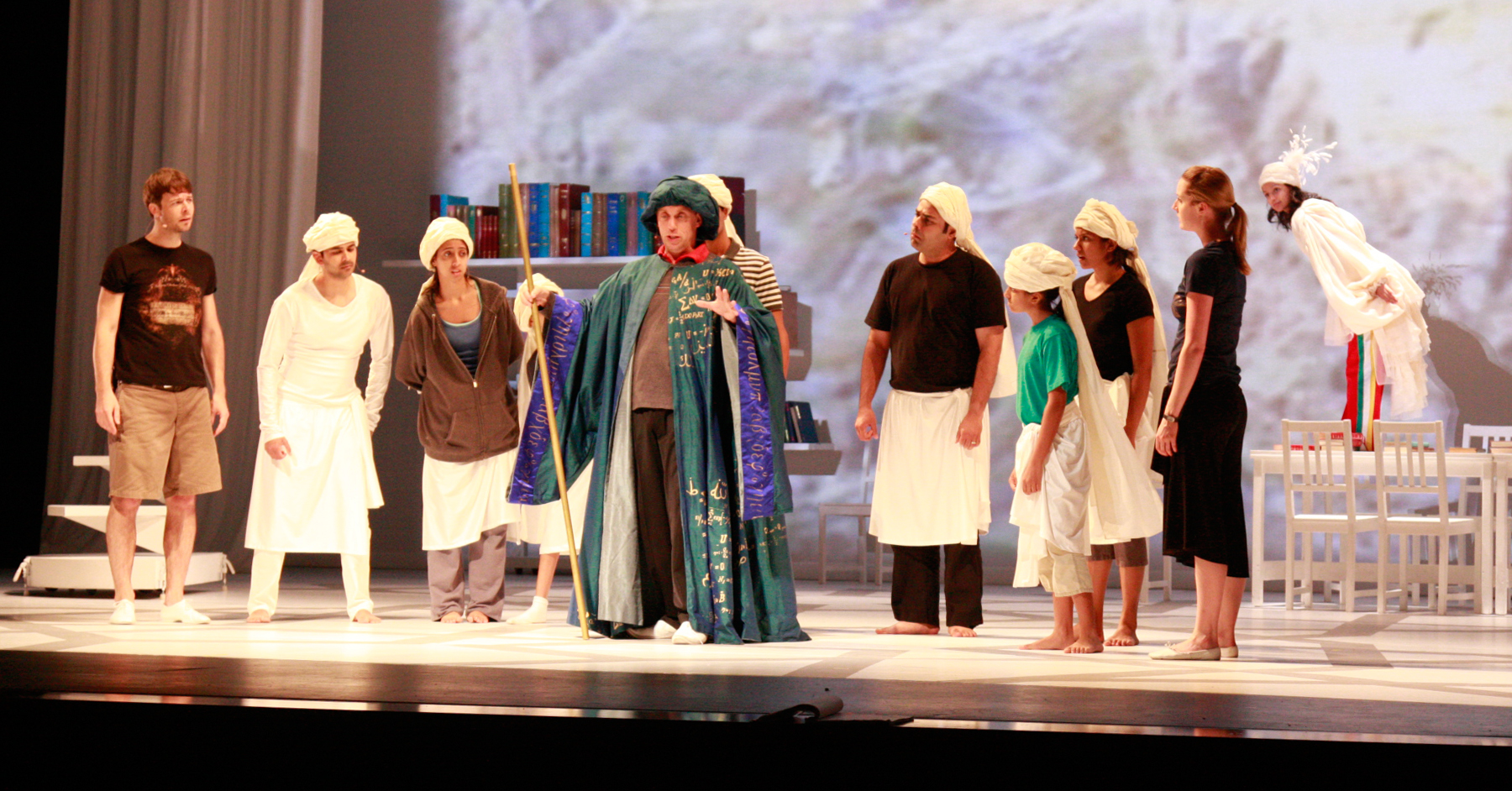 The cast on stage during rehearsals. Celebrations Global Limited

Overheard Payam saying something especially poignant: “theatre is very delicate, no show is ever the same any night.” It is so true. We went into our first Dallas performance not feeling completely prepared, but when it came to our final show – with the audience still laughing, crying or singing along – we realised that adjusting to a new rhythm is not so bad. The satisfaction in performing is the same. 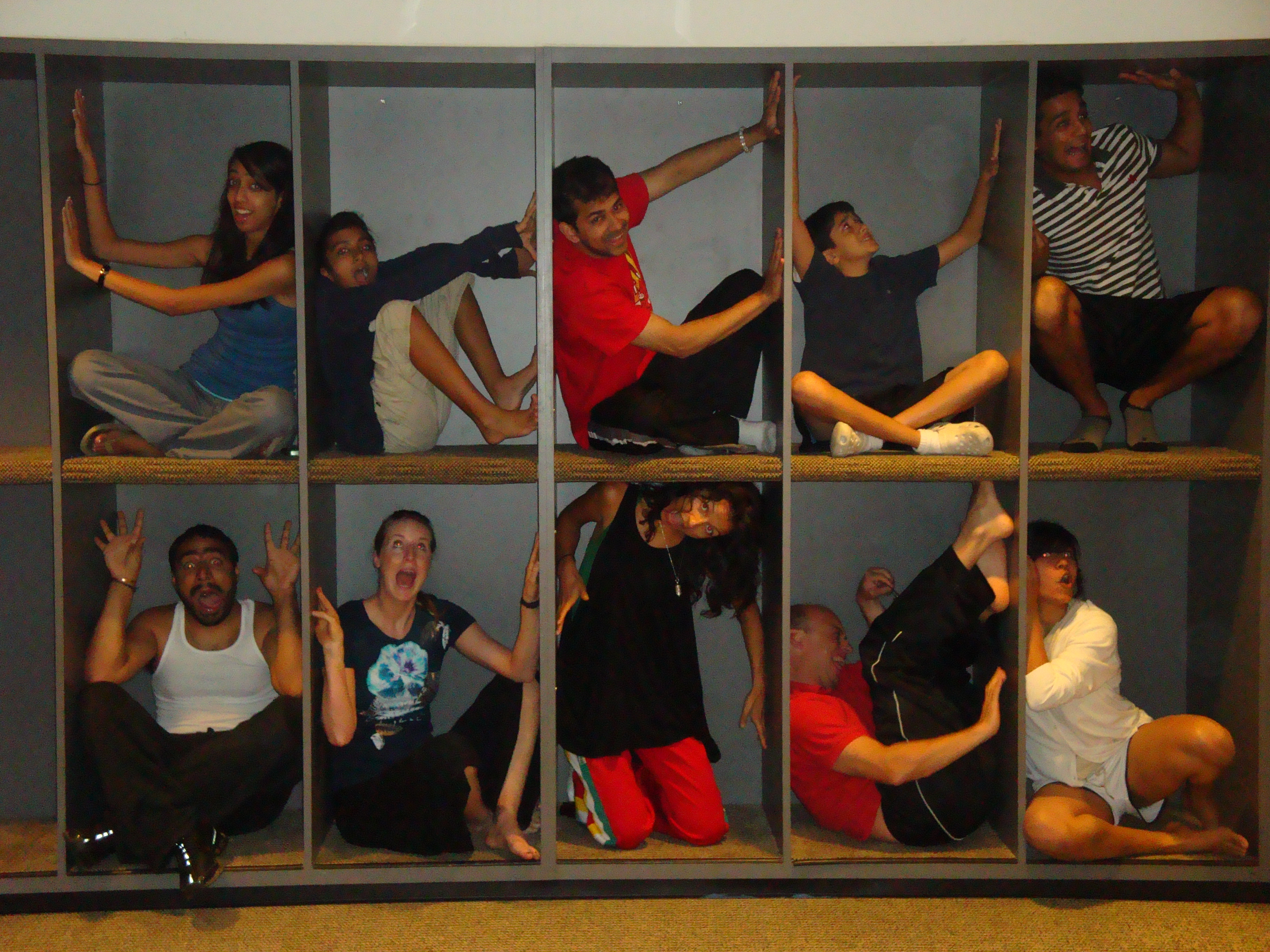 Upon arriving in Dallas, the first thing we felt was heat. Dina aptly described it as “living in a sauna.” The rest of the group is convinced they will meet cowboys around every corner, but those of us from the USA aren't so sure about that.

Our orientation was at Plano Jamatkhana – which helped us to get pumped about the city and the show. We met the whole volunteer team and ate Popeyes Chicken in the gorgeous courtyard. A few nights later we participated in a “Meet the Cast” panel to answer questions about our experience.

Working on this show is unlike any other theatre experience because we get to meet the audience and see all of the interest and curiosity beforehand. It makes the performance mean a great deal more to us.

Thursday and Friday before the show was all about tech. Tech is where the costumes, make up, lighting, and sound – all areas that have been working separately – come together and essentially build a show. But it takes a lot of patience and a lot of time, and one two-minute scene can take two hours to perfect – especially with a show of this size.

Not all of us knew how much effort it would take, but as Salima said: “It's a lot of boredom with pockets of intensity.” Perfection is our goal and tech is what it takes to get there.

Anyway the hard work definitely paid off during the first two shows on Saturday! We couldn't have asked for a more successful opening. In one day we went through two shows, two meals, and a photo session, but it all passed so quickly! 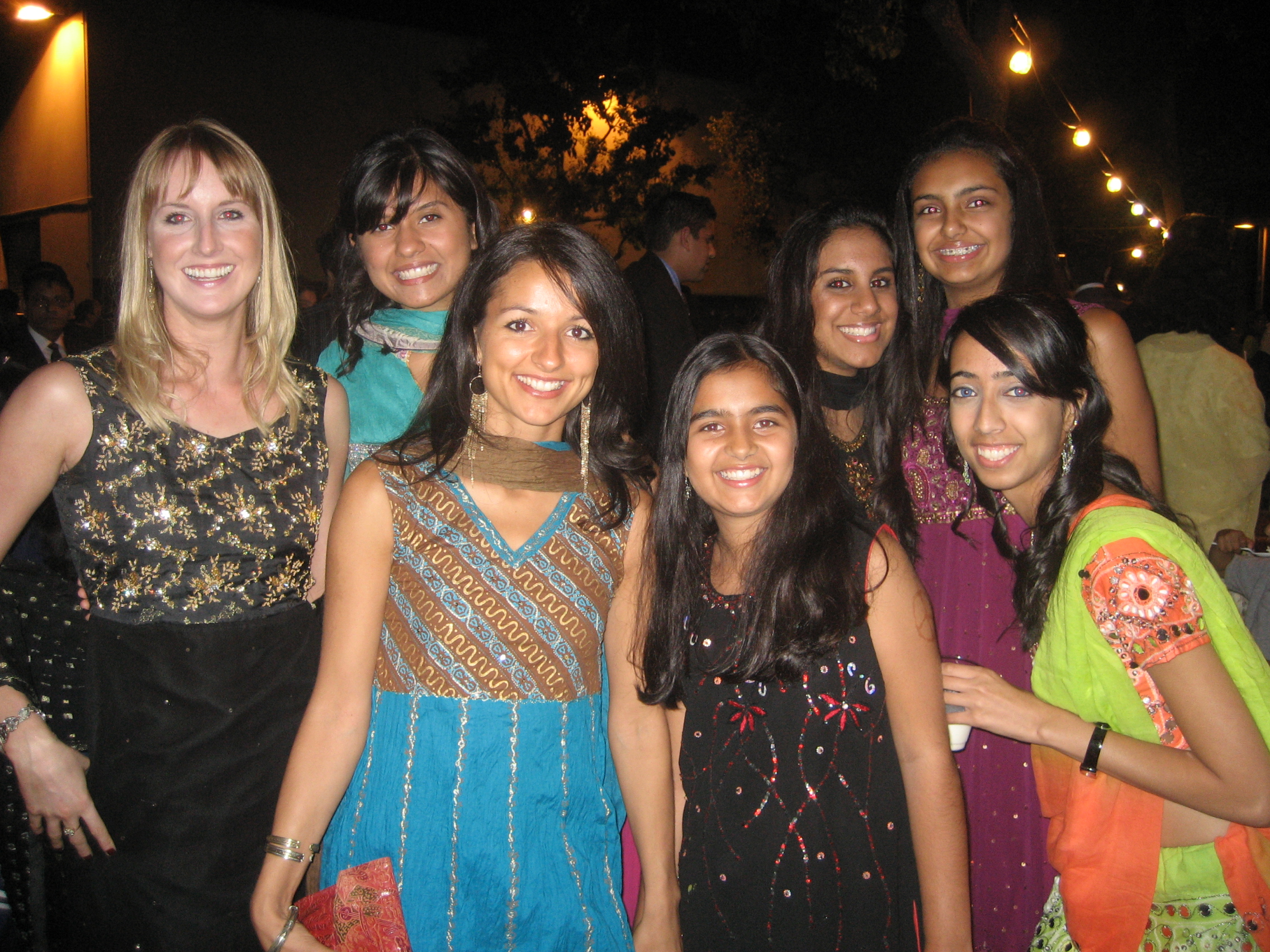 Local members of the Jamat pose with the crew for a photo during the Imamat Day celebrations in LA. Celebrations Global Limited

After the show we met the sponsors who loved the play, but all we could think about during the show were the small slip-ups! Seeing the audience's response at the end – little girls and grandfathers touched by the same emotions – made us remember why we are doing this.

Performing about our religious heritage gave us a sense of pride and is a great privilege. It has only been three weeks but our group is so “tight” (yepp, in California language). We really feel blessed to be working with people who not only treat this as work, but who are also learning from it like we are. We may not be getting our mums' food every day, but we feel just as well looked-after.

From the soccer game to the intense practices, to spending time with strangers that have become family, we are off! Dallas, Texas here we come!

Ya Ali Madad,
– the Four 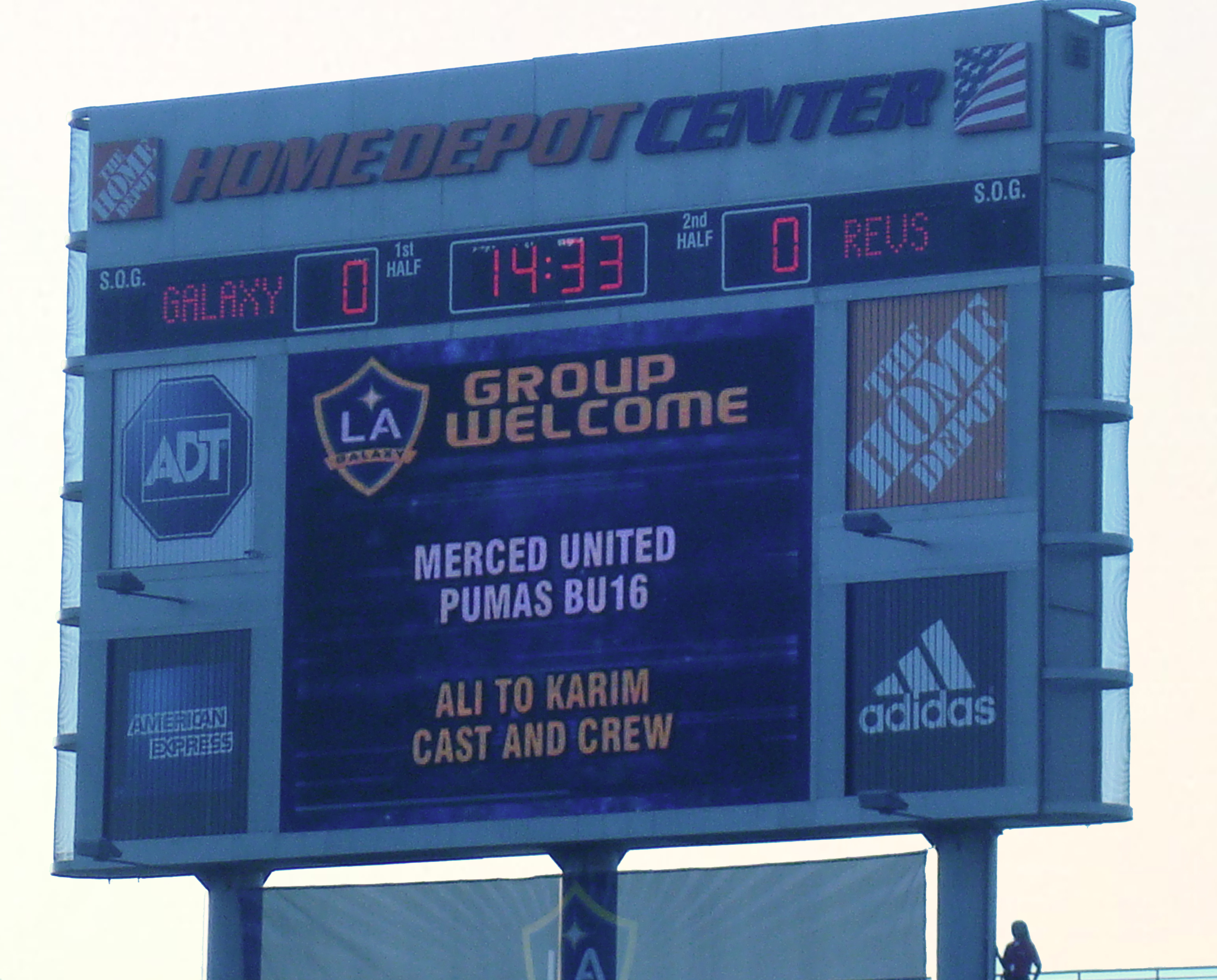 LA Galaxy welcomes members of the Ali to Karim cast and crew during the half time interval. Celebrations Global Limited

Hey – we've been busy all week but we needed to show our international cast a good old-fashioned American Fourth of July. What better way than an LA Galaxy soccer game with the entire ALI TO KARIM team?

Working 15 or 16-hour days is positively worth it when you get to watch a mind-blowing fireworks display on a perfect breezy Fourth of July night with new friends. Jason, our stage manager, was beaming because he “definitely” met David Beckham on his way out!

Anyway, can't believe we only have about a week of rehearsal time left. Rehearsal is a creative and inventive process, but also a gruelling one when you're repeating scenes. We're learning the play bit by bit. 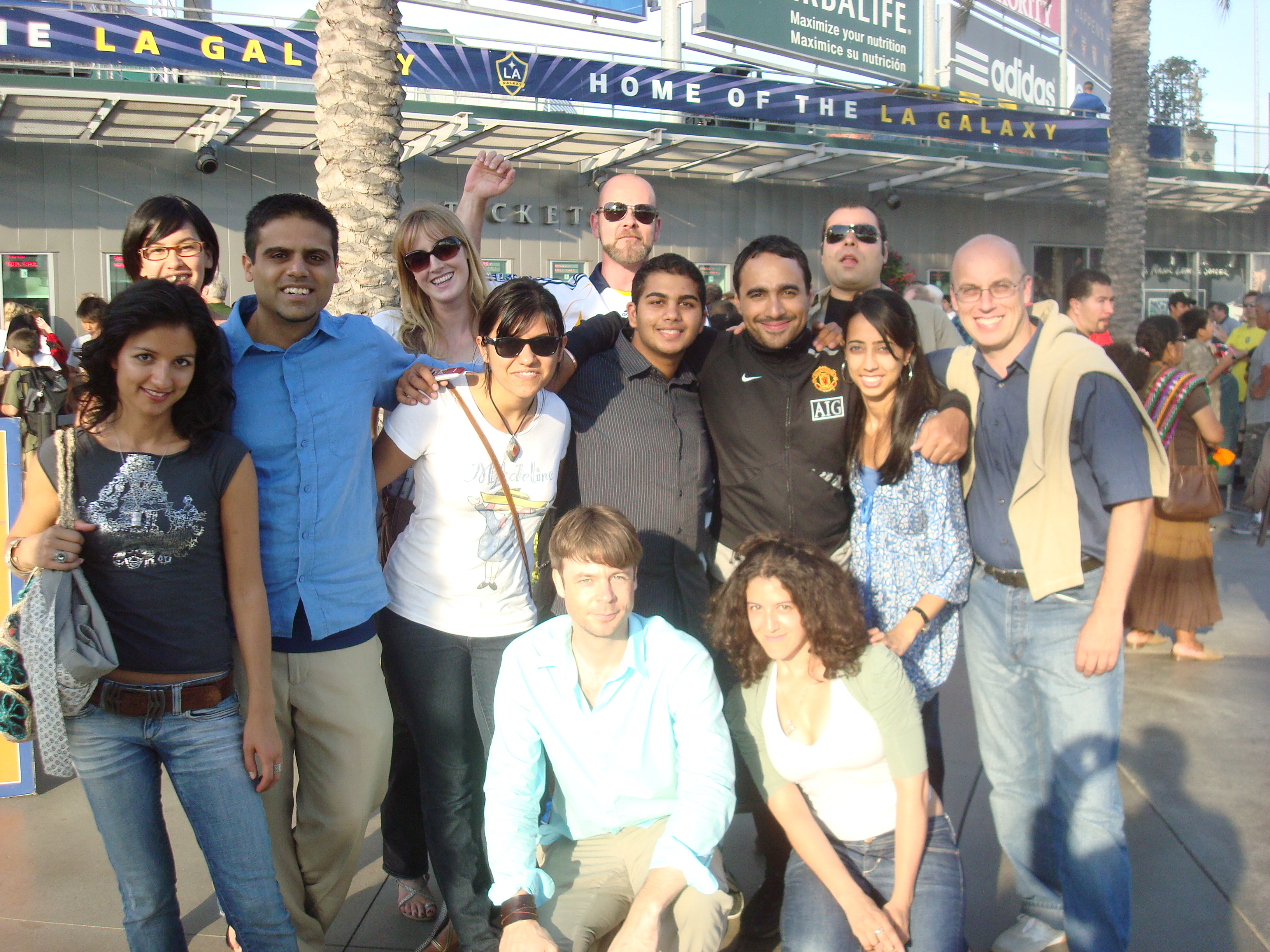 The Ali to Karim cast and crew at an LA Galaxy game. Celebrations Global Limited

From about 8:00 AM to 6:00 PM we drill group parts and breathe life into our own characters. During the one-hour lunch break, some of us take a little power nap or catch some fresh air. But between the routine and the progress, we are learning about real life and the commitment it takes to succeed. Even actors need to push themselves!

In Jamatkhana the other day, Salman gave a presentation on history and we were all amazed by how much the Jamat already knows! But they were also intrigued by our approach to the play – not depicting any of the Imams directly, and having six non-Ismailis reciting ginans and tasbihs.

Until next time – peace!
The Crazy Four

One of many moments that the cast and crew will spend travelling over the course of the US Tour. Celebrations Global Limited

Ya Ali Madad! This is Areebah, Noren, Adil, and Salman – or as we are now called the “Gang of Four.” We are fortunate to have been selected as the national cast of ALI TO KARIM: A Tribute to the Ismaili Imams.

We flew into Los Angeles from across the United States, not quite knowing what to expect. But there were so many friendly faces to help us at the airport and in the hotel. We were glad to meet our production crew, our producer Salima and our director Hafiz, all of whom we had heard great things about!

During the weekend, we went through our first read-through with Hafiz. The 9:00 AM call was a bit earlier than our usual summer schedules. While we read, Hafiz directed and the production team worked in the background.

It was the first time we saw the crazy side of our director: “Alright, now get up and let me see it. Improvise! Let's see what you guys have to show us!” We were given the “big book” and told to run around and do this and do that. Hadn't realised that so much of this play would be created between the four of us!

Now a couple days into rehearsal we are starting to notice that in addition to gaining an academic understanding of our history, we are also breaking boundaries amongst ourselves. The experience has been both fun and very demanding.

The international cast has been working for months to put together this play, but finding our places, assigning our parts, etching out our characters all need to be done. Right now we're just trying to sort out lines and learn choreography.

Memorising all these lines is a daunting task – the script is thick. We each come with different acting and dancing experience, but we all agree that this is going to be our biggest thing yet.