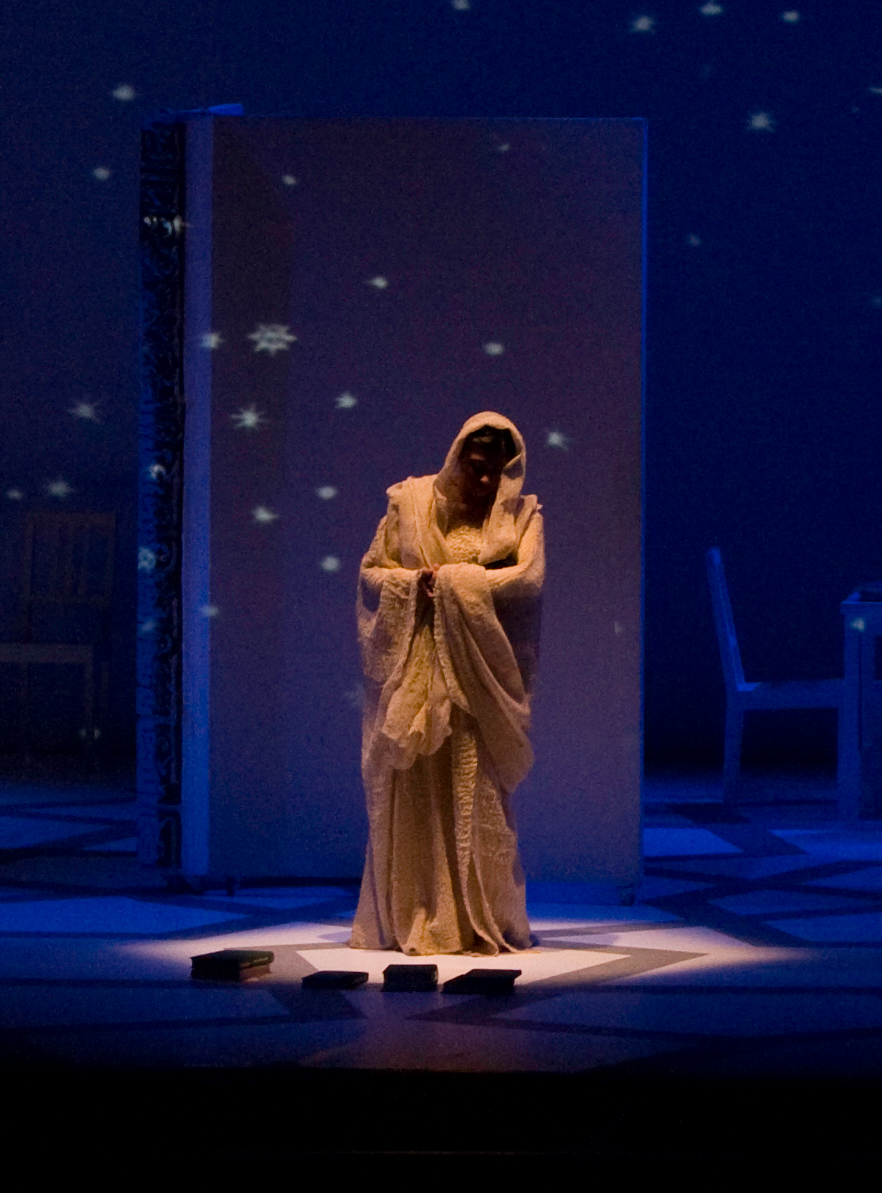 In the formative period of Islam, differing perspectives on the nature of religious authority emerged, eventually coalescing into two broad groups of Muslims, Shia and Sunni. The Shia, already in existence during the lifetime of Prophet Muhammad (peace be upon him and his family), maintained that while revelation ceased at the Prophet's death, the need for the community's spiritual and moral guidance continued, calling for an ongoing interpretation of the Islamic message. This, the Shia affirm, could only be given by an authoritative teacher – the Imam – from the Prophet's family and progeny (Ahl al-Bayt). This concept of leadership was rooted, above all, in the Shia understanding of the Holy Qur'an, reinforced by the Prophet's pronouncements which are understood as unequivocal designation of Hazrat Ali ibn Abi Talib, the Prophet's cousin and son-in-law, as the first in the line of hereditary Imams.

Scenes 3 to 5 – Impressions of Hazrat Ali: an auspicious birth, companion of the Prophet, a chivalrous hero (javanmard), a learned scholar, the first Imam.

Scene 7 – Martyrdom of Imam Husayn at Kerbala; the devotion of Imam Zayn al-Abidin; contributions to the understanding of Shia doctrine by Imams Muhammad al-Baqir and Jafar al-Sadiq; and the emergence of two Shia communities, Ithna Asharis (Twelvers) and Ismailis. 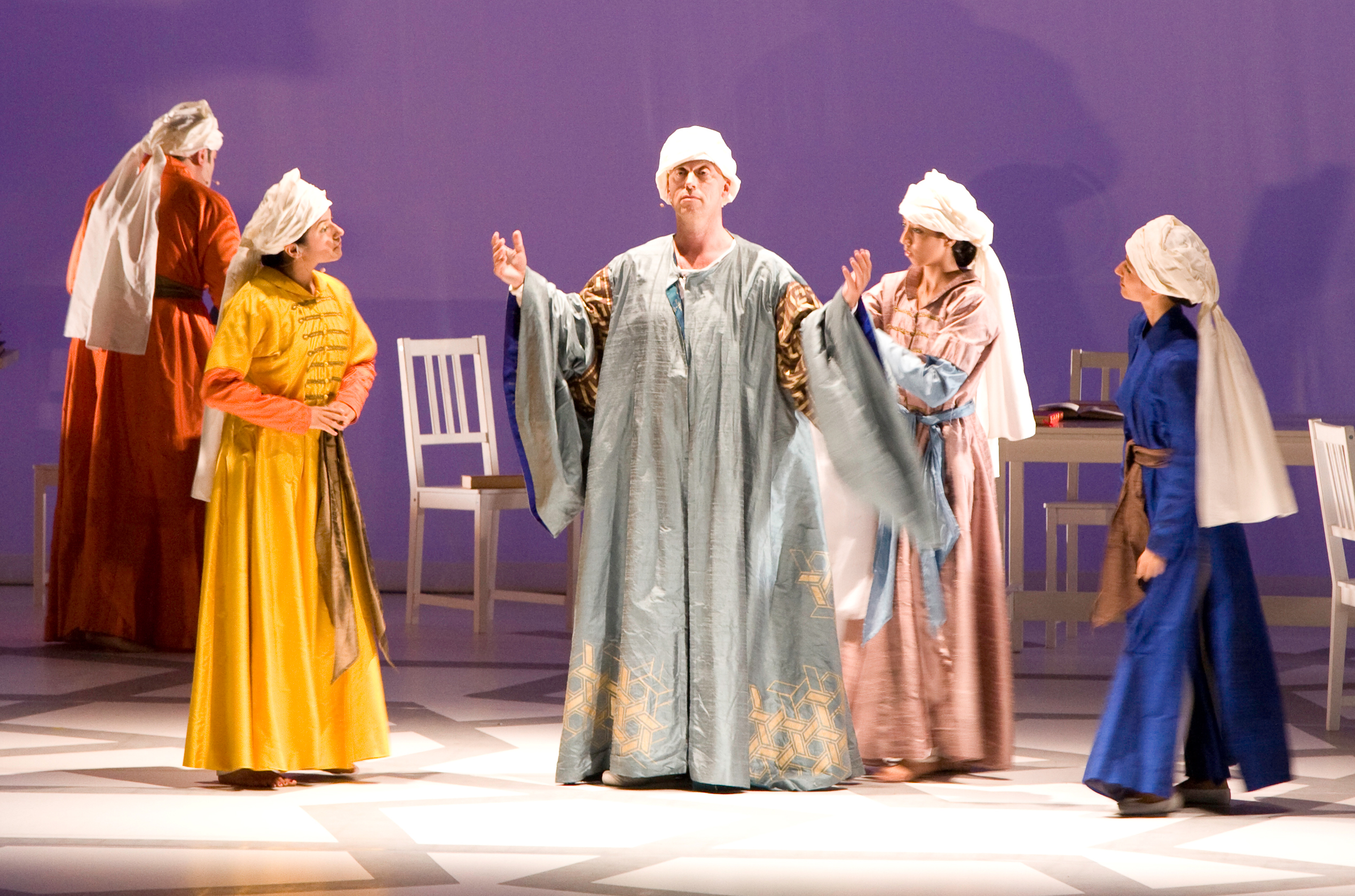 The four successive Imams after Imam Ismail lived in environments and circumstances that required them to conceal their identities. Establishing a base in Salamiyya, Syria, the Imams organized a wide network of da‘is (loyal emissaries) who, with great intellectual competence, spread the message of Islam and the teachings of the Prophet and the Imams (peace be upon them).

A metaphorical illusion to a tale of the Seven Sleepers, who, according to legend and tradition, fled from religious persecution and took refuge in a cave for over 300 years, awaking in a new dawn.

Scene 1 – The Seven Sleepers: a metaphor for this period in which a wide network of da‘is emerge to spread Ismaili thought.

Scene 4 – The renowned scholars, Ikhwan al-Safa (Brethren of Purity), who were influenced by Ismaili thought. 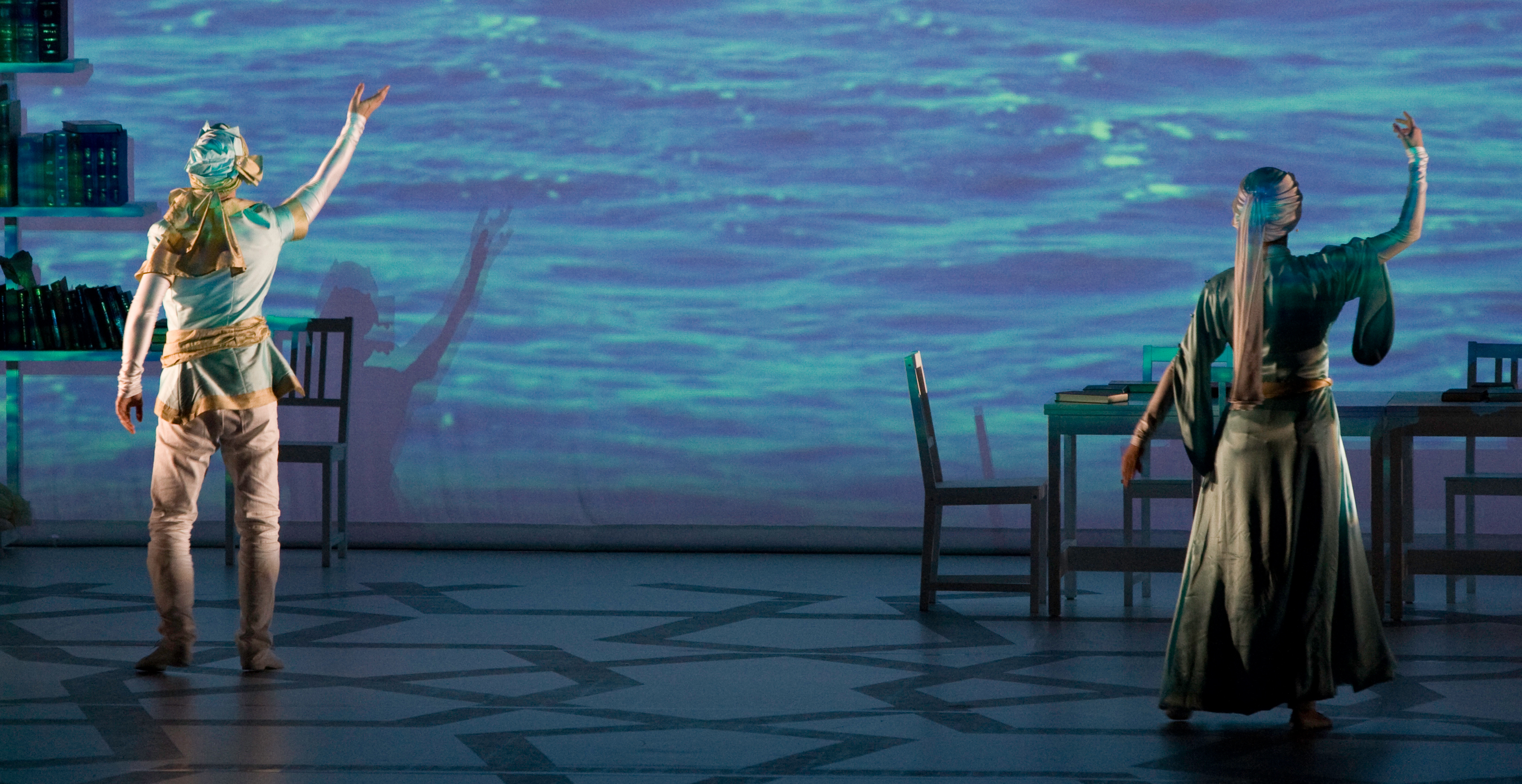 The majestic entrance of Imam Al-Mahdi into a sea port town that would eventualy bear his name. Farhez Rayani

The Ismaili Imams for the first time established a state (caliphate) in North Africa. At its peak, the Fatimid Caliphate, centered in Egypt, extended westward to North Africa, Sicily and other Mediterranean islands, and eastward to the Red Sea coast of Africa, Palestine, Syria, the Yemen and the Hijaz. The geographer, al-Muqaddasi, wrote of the harmony among different religious groups in Fatimid lands. Christians and Jews, as well as Muslims of all persuasions were able to rise to the highest echelons of the Fatimid state on grounds of merit and competence. The Fatimids' patronage of learning, the sciences and cultural endeavors made the Fatimid court of Cairo a flourishing center of civilisation, attracting artists, poets, mathematicians, physicians, astronomers, and thinkers from all over the Muslim world as well as Europe and the Far East.

This period of Ismaili history has been described by many scholars, Muslim and non-Muslim alike, as a ‘golden age' of early Islamic thought and literature. The Fatimid ethos espoused inclusiveness, pluralism, meritocracy and free intellectual inquiry.

Scene 1 – Advent of the Fatimids; Tale of the Gardener in Sijilmasa: a prophecy about the coming of Imam al-Mahdi (the Rightly Guided One).

Scene 2 – Majestic entrance of the Imam into a sea port town eventually named al-Mahdiyya after him; al-Mahdiyya is in current day Tunisia.

Scene 3 – The auspicious construction of the Fatimid capital in Egypt begins; the alignment of the planet al-Qahir (Mars) prompts its name, al-Qahira, Cairo, the City Victorious.

Scene 6 – The Sun and Moon: metaphors of Light. 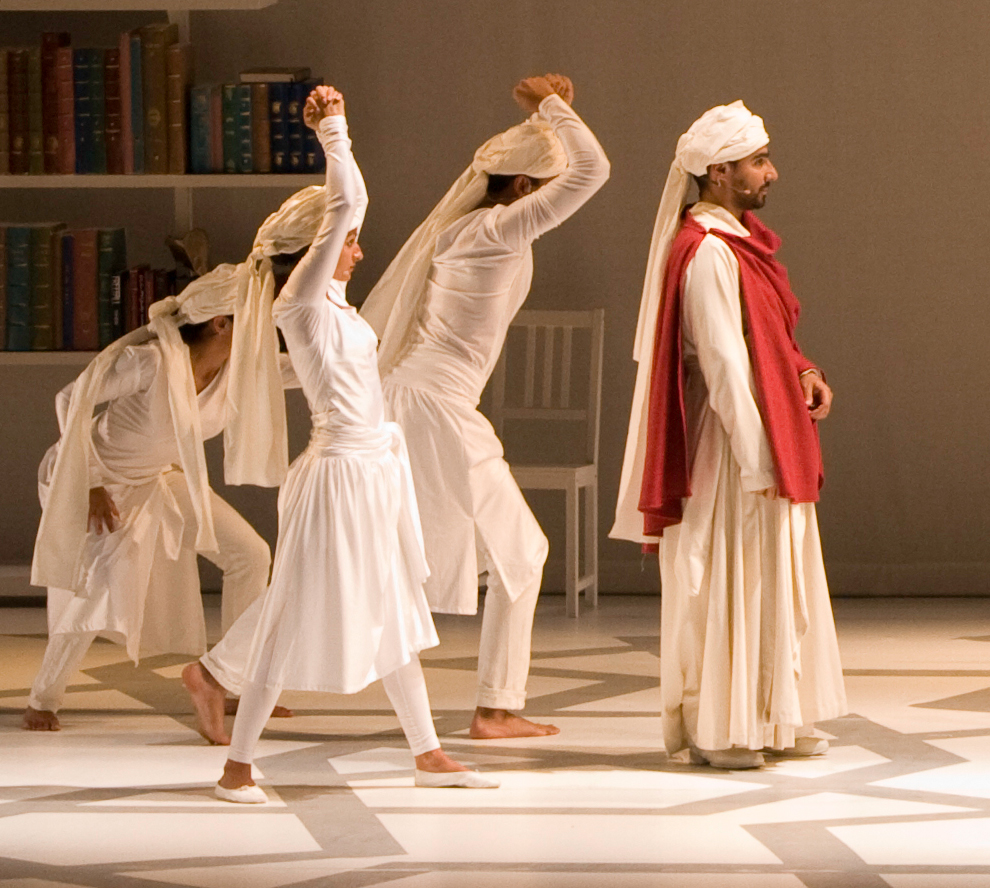 The seat of the Ismaili Imamat moved to Iran, where the Ismailis succeeded in establishing a state comprised of a defensive network of fortified settlements. With its head-quarters at Alamut in northern Iran, the Ismaili state later extended to parts of Syria.

While continually struggling to keep hostile forces at bay, the Ismailis of the Alamut state maintained their intellectual and literary traditions. Their fortresses housed impressive libraries whose collections included books on various religious traditions, philosophical and scientific texts, and scientific equipment. Despite the hostile environment, the Ismailis upheld the primacy of the intellect and their patronage of learning, benefiting Muslim as well as non-Muslim scholars and scientists. Ismaili settlements provided sanctuaries for waves of refugees fleeing the Mongol invasions. It was these invasions that ultimately brought down Alamut in 1256.

Scene 1 – Origin of the Nizari Ismailis.

Scene 3 – A hierarchy of believers.

Scene 4 – In defense of Ta'lim (authoritative teaching) an imagined debate between Hasan Sabbah and al-Ghazali on the role of the living guide, the Imam of the Time.

Scene 5 – A network of castles.

Scene 8 – An imagined encounter between Russian scholar Vladimir Ivanov, explorer Freya Stark, and French philosopher Henry Corbin, at the foot of Alamut on the eve of the Mongol invasion. 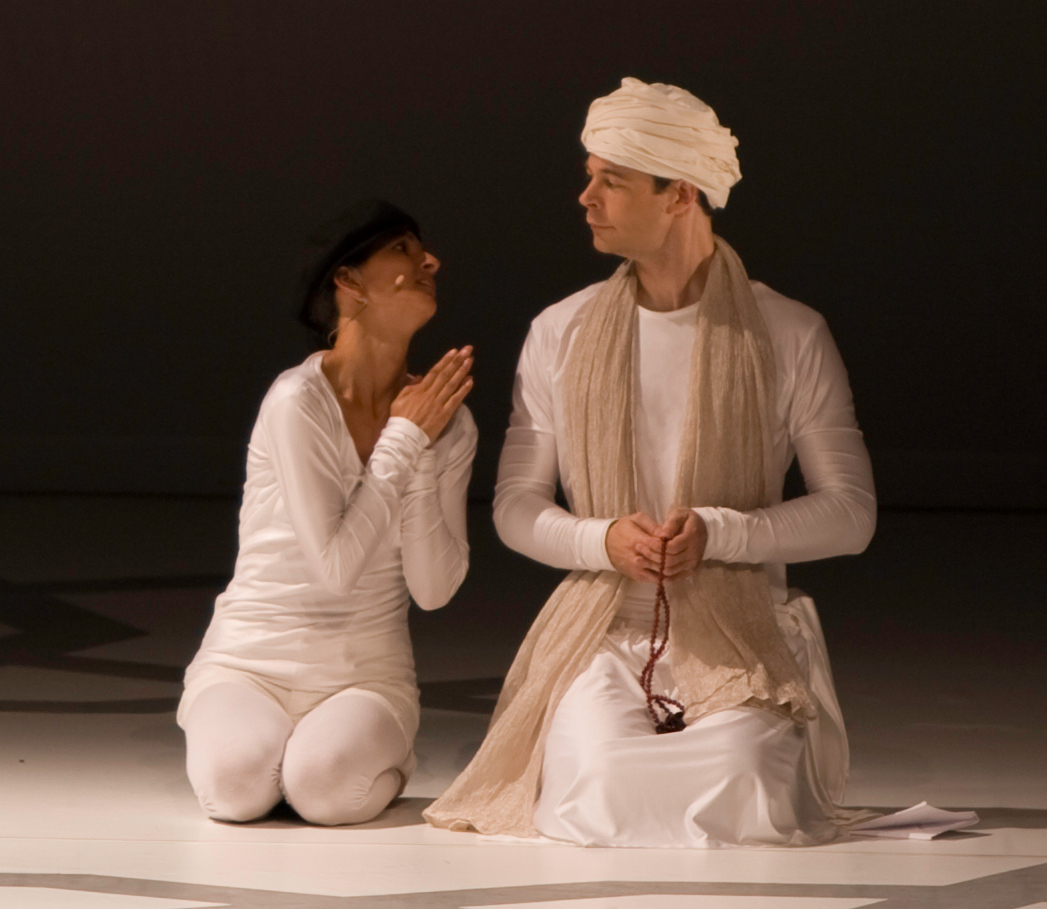 The post-Alamut period in Ismaili history spanned more than six centuries. Ismailis lived in dispersed communities under the direction of each succeeding Imam. Over centuries, centers of activity were established in southern Iran, the Indian sub-continent, Afghanistan, the mountainous regions of the Hindu Kush, Central Asia and parts of China. During this time, Nizari Ismailis observed taqiyya (precautionary dissimulation), concealing their true beliefs, practices and literature in order to protect themselves from persecution. By the mid 15th century, relations between Ismailis and Sufi orders in Iranian lands were warm and cordial. The Ismaili Imams appeared to outsiders as Sufi Masters or pirs, while their followers adopted the Sufi appellation ‘murids' (disciples).

Scene 1 – Russian scholar Ivanov at the tombs of Imam al-Mustansir billah and Imam Gharib Mirza in Anjudan, and Imam Nizar in Kahak.

Scene 2 – A tribute to the resilience and survival of the Ismailis over centuries.

Scene 3 – Establishment of Jamat Khanas on the Indian sub-continent.

Scene 6 – At the court of the Qajars, the monarch Fath Ali Shah confers the title of Aga Khan upon the 46th Imam, Mawlana Shah Hasan Ali. 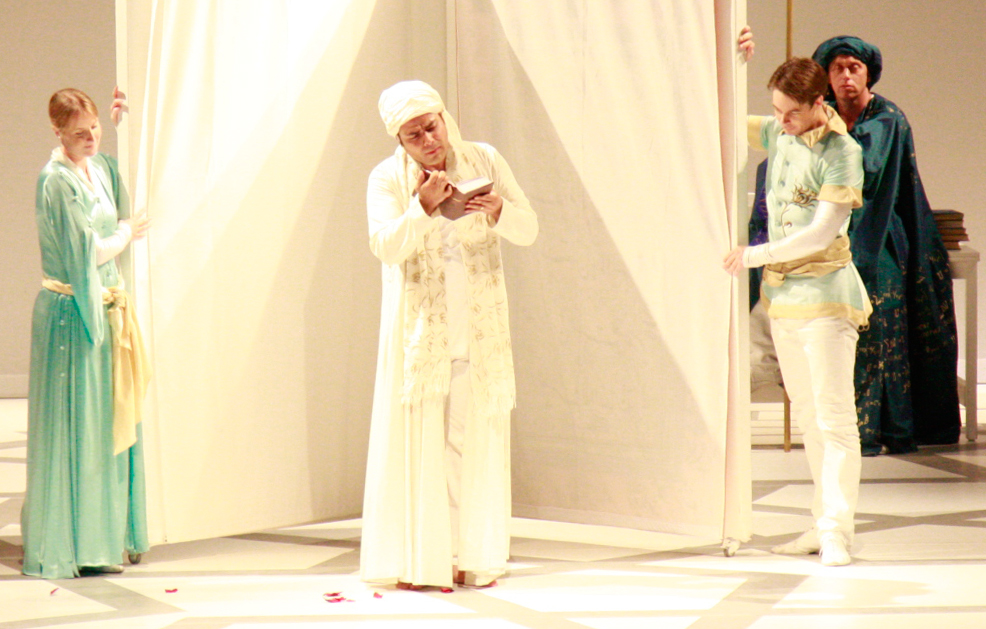 The 46th Imam, Aga Hasan Ali Shah, settled in India, establishing his headquarters in Mumbai (Bombay) in 1849, laying the foundations for the Ismaili community's future social progress, and beginning an era of more regular contact between the Imam and his widely dispersed followers.

Passing away in 1881, Aga Khan I was succeeded by his eldest son, Aga Ali Shah, who became Aga Khan II and the 47th Imam. Imam Aga Ali Shah later received the title of His Highness, first granted to his father, from the British government. He set about the long-term task of the community's social development with emphasis on education, establishing a number of schools in Mumbai and other centers where Ismailis lived. After only four years as Imam, Aga Khan II passed away in 1885. The office of Imam then devolved upon his son, Sultan Muhammad Shah, who became the 48th Imam. At the time of his accession, Imam Sultan Muhammad Shah was seven years old. At age nine, he received the title of His Highness from Queen Victoria.

Under his 72-years of leadership and guidance, the community entered a period of remarkable progress in health, education, housing, commerce, and industry. In South Asia and East Africa, he established networks of health clinics, hospitals, schools, hostels, cooperative societies, investment trusts, building societies, and insurance companies.

Scenes 5 to 6 – Appreciation of the arts (painting, ballet, opera) and love of sports. 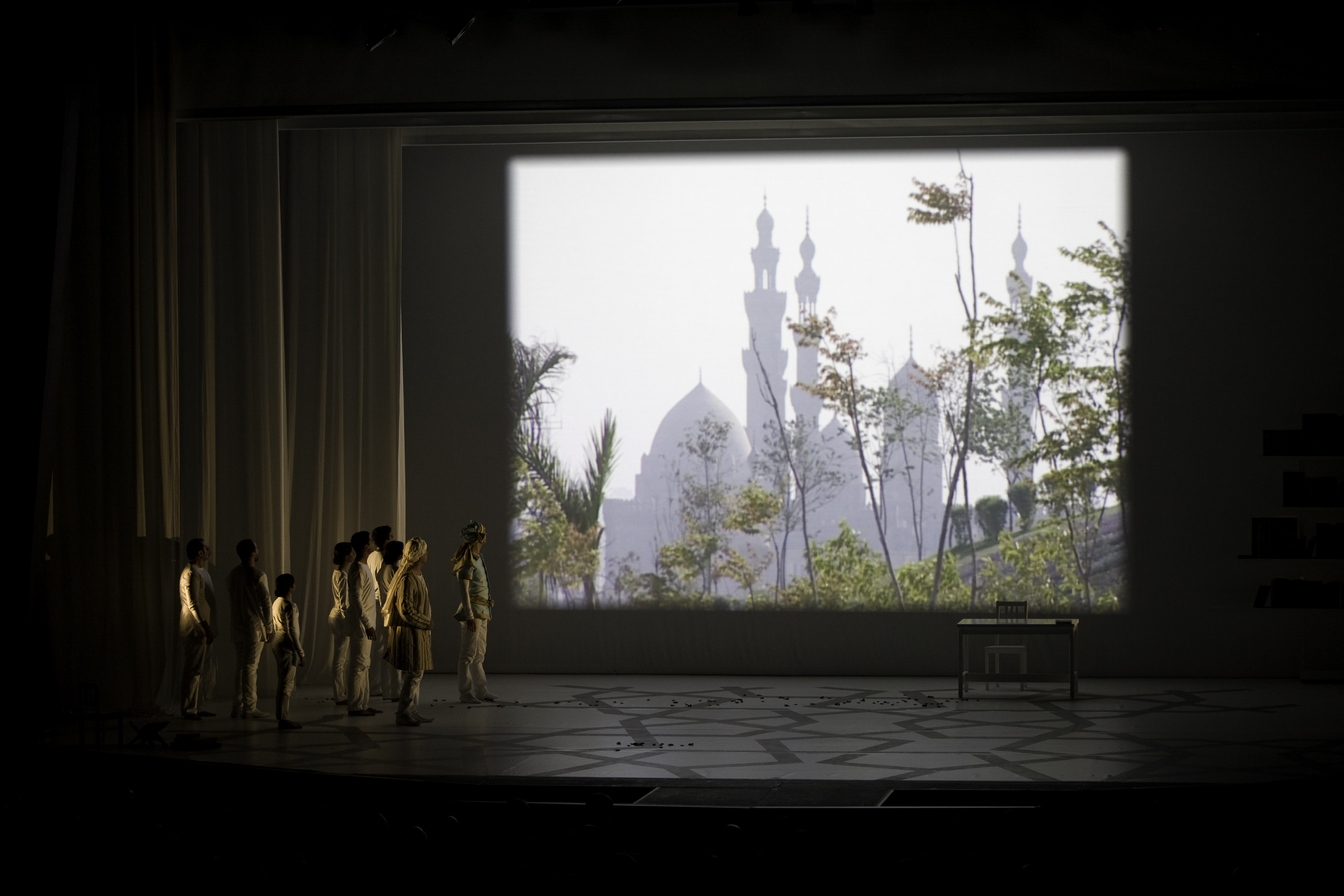 Paving the path towards a pluralist future. Farhez Rayani

Imam Sultan Muhammad Shah passed away on 11th July 1957, and was succeeded by his grandson, Prince Karim, as Aga Khan IV and the 49th hereditary Imam of the Shia Ismaili Muslims.

Mawlana Hazar Imam emphasizes that Islam is a thinking, spiritual faith that teaches tolerance and compassion, and upholds the duty to respect and support Allah's greatest creation – humankind. Consistent with the 1 400 year old Muslim tradition of leadership and ethics, it is the Imam's role not only to guide in matters of faith but also to lead in the effort to ensure the security and well being of the Jamat and others amongst whom the Jamat lives. It is in this context of improving the quality of life that Mawlana Hazar Imam has established the Aga Khan Development Network (AKDN), which is active in the fields of education, health, culture, industry, tourism, media, civil society and infrastructure development. Underpinned by the Muslim ethic of compassion for the vulnerable in society, AKDN agencies work for the common good of all citizens, regardless of ethnicity or religion.

Scene 2 – Takht Nashini: the investiture of Mawlana Shah Karim al-Hussaini as 49th Imam of the Ismailis.

Scene 4 – Paving a path towards a pluralistic future.