After captivating the Jamat and, in a special way, bringing the history of the Ismaili Imams so close to the Jamat during their tour of the United States, the cast and crew of ALI TO KARIM: A Tribute to the Ismaili Imams share their parting reflections and memories of what the experience was like for them." 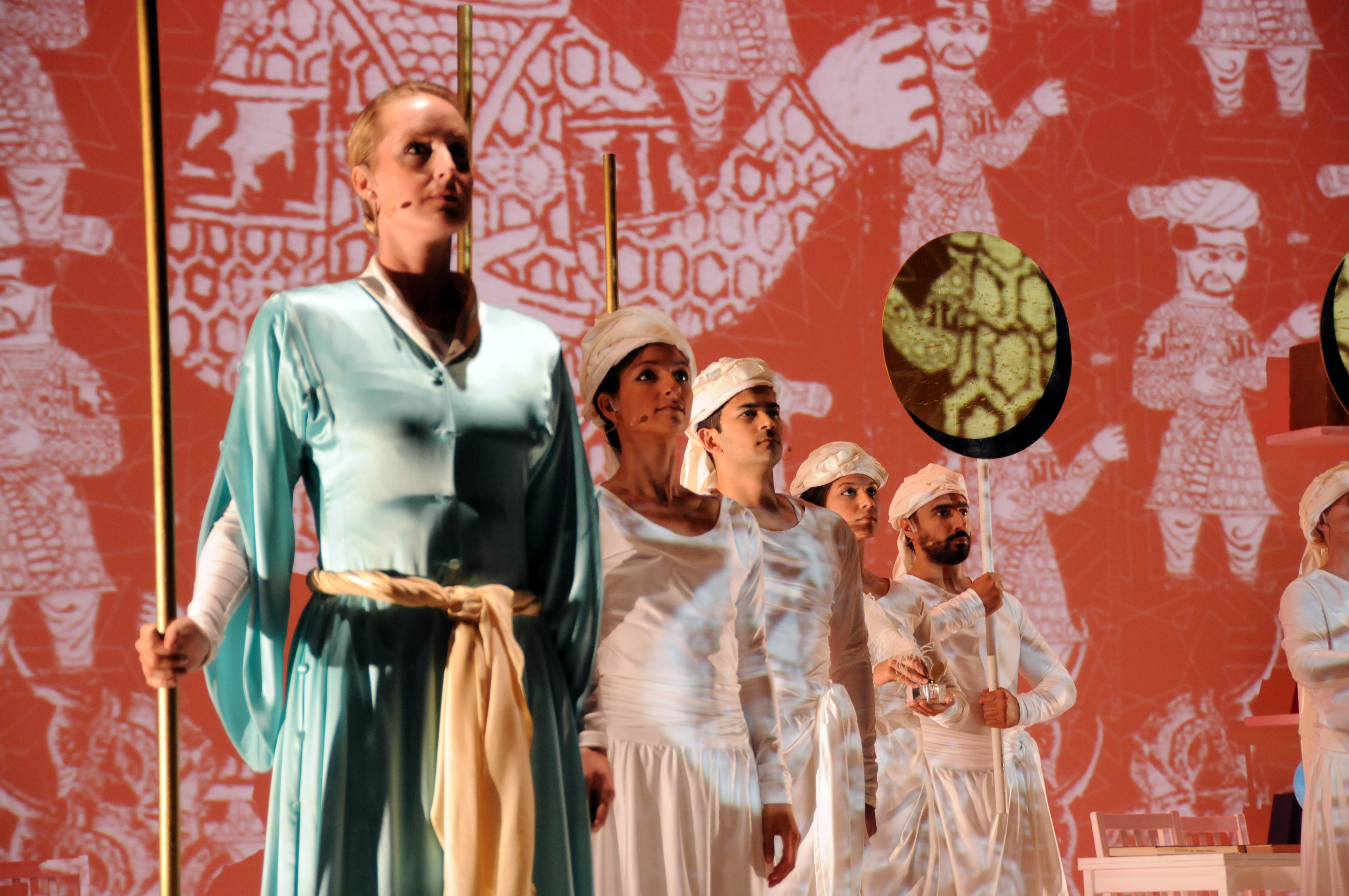 After completing a whirlwind tour of seven US cities in seven weeks, the team behind ALI TO KARIM: A Tribute to the Ismaili Imams, has now packed-up their sets, costumes and props, and parted with a trunk full of memories.

The cast and crew staged 21 performances that drew an audience of more than 20 000, and captivated the Jamat with their creative energy. They brought history to life in a manner that had never been done before.

“Anyone who can make my eight year old daughter laugh and still learn her history at the same time deserves a compliment,” commented Sohail Momin, a Jamati member from Texas. “I watched the show in Dallas and still got goose bumps when I saw it again in Houston. This is the most magnificent project for which I have volunteered. All the shows had a full house with the audiences engaged… that is the best reward.” Ali to Karim scene: At the foot of Alamut. Hyder Ali

Rahim Budhwani of Houston said he went with “high expectations and left with his expectations fulfilled. Every aspect of the program was executed perfectly… It was a great refresher on a lot of topics I had not thought about in a very long time. It was an extremely humbling realisation to see and hear about what our Imams have gone through for the development of the Jamat.”

The cast, which included professional actors as well as national and local participants from the USA Jamat, were enriched by the experience of creating the show . Iranian actor, Payam Hosseinian played the Fatimid Dai, Mu'ayyad fi'l-Din al-Shirazi, the historian, Juvayni and the poet, Saadi, among other roles, commented: “I met many people. I saw America. I love acting – I was under the lights, my voice was heard. What I'm going home with is the love and appreciation that I received.” The production of Ali to Karim complemented the Golden Jubilee year and sought to educate the Jamat about the institution of the Imamat. That it was done creatively while representing an authentic and impassioned history of the Ismailis is a tribute to the producers, writers, designers and cast; all of whom richly deserved the standing ovations they received after every performance.

Reflections of the cast and crew

“It is the people we have met that have made the most impact on me. The US actors helped us understand their faith and demonstrated their passion for their faith. It has been amazing how unbelievably helpful everyone is. Everyone's wish is to help and make the experience happy. They do it for the love of Hazar Imam and to serve. This has definitely affected us, your way of dealing with other people.”
– Kirsten Shaw (International cast)

“The performance talks about history and is expressed through different mediums, and at the same time it is connecting different generations and sharing one identity. This is cool and rare. I have grown through this experience… I have always thought about what I should do for Hazar Imam, now I understand that I can do anything in this world that is good and Hazar Imam will have a spot for it.”
– Areebah Ajani (US cast)

“Amongst a lot of things, what I admire the most is the love and compassion that has been demonstrated throughout the tour by the volunteers and the Jamat. There is a genuine desire to be part of this project, in every city, and also to learn about their history. But mainly the love that is part of the service that all perform.”
– Jason Benterman (Company stage manager)

“The tour and the performances have had a profound impact on me, in terms of my own spiritual understanding. At first, we were very hesitant. Then the sense of comfort grew and we learned a lot about acting, but we learned a tremendous amount about our faith, in a spiritual sense more so than a literal sense. I really enjoyed everyone's company and we learned from all of the cast and the crew.”
– Asif Sayani (US cast)

“We have been spoiled rotten and have been in an Ismaili cotton wool box for nine weeks. It feels like there is magic, it resonates in a different way from any other shows I have done. There is magic in the words. In working with the US actors, I have learned more about myself than I have taught them. It feels like a big family instead of just co-workers. I have had a great time and have also been able to see and do so much during this tour. There is a saying: ‘leave no stone unturned.' On this tour every stone in my life has been turned. It has also been an education about Ismaili culture and I hope Ya Ali Madad will be said all over the world one day.”
– Guy Rhys (International cast)

“We were able to create this play from scratch and it was an opportunity of a life time. It stretched me, excited me, infused me, and I am proud of what we have created because it is not just a play but a reaffirmation of peoples beliefs… I have learned so much about communities and how important they are. The world is losing this richness, a community that provides unconditional support, undoubted, and without question. It has been very moving to be embraced so openly!”
– Damian Christian-Howard (International cast)

“It was amazing to combine three things that I love through a single medium: my faith, my community, and my love for theatre. It has been an opportunity that has changed me. I was going to pursue education in just acting but now I am going to also learn about directing and producing.”
– Adil Lavji (US cast)

“It is going to be hard to leave as everyone has become a family. In every city we made a new family, it was not like other shows I have done where it is a business – this was different, it was a family. It was a performance that was specifically written for a specific audience. When we perform and hear everyone singing the ginans and knowing it, this is so magical for us, it is really memorable. Areebah and Noren are now like my sisters. The US actors gave us insight into the faith, the culture, and the traditions. We taught them about acting but they taught us more about the Ismaili faith and this made us better actors. We will really miss them.”
– Dina Mousawi (International cast)

“The Ali to Karim experience has been to me (to quote Professor Ivanow, one of the actors I play) ‘the extraordinary faithfulness and devotion to the history of your ancestors.'
A whole two months playing for packed audiences who loved the show in some of the most beautiful theatres, what more can an actor ask for? We've all learnt about Islam; about Sunni and Shia and I've been able to explain the faith and the culture to my friends.”
– Duncan Foster (International cast)

“In my ten year professional career, this has been one of the best shows I have worked on; my partner Kimie and I are very proud of the design. The opportunity to travel around the United States with the show has been amazing, and all the friendly, hardworking Ismailis that I met from the community proved to be great team players. You don't get this in theatre usually – that the people you're doing the show for, are also the ones helping to make it happen.”
– Matt Deely (Set and costume designer) 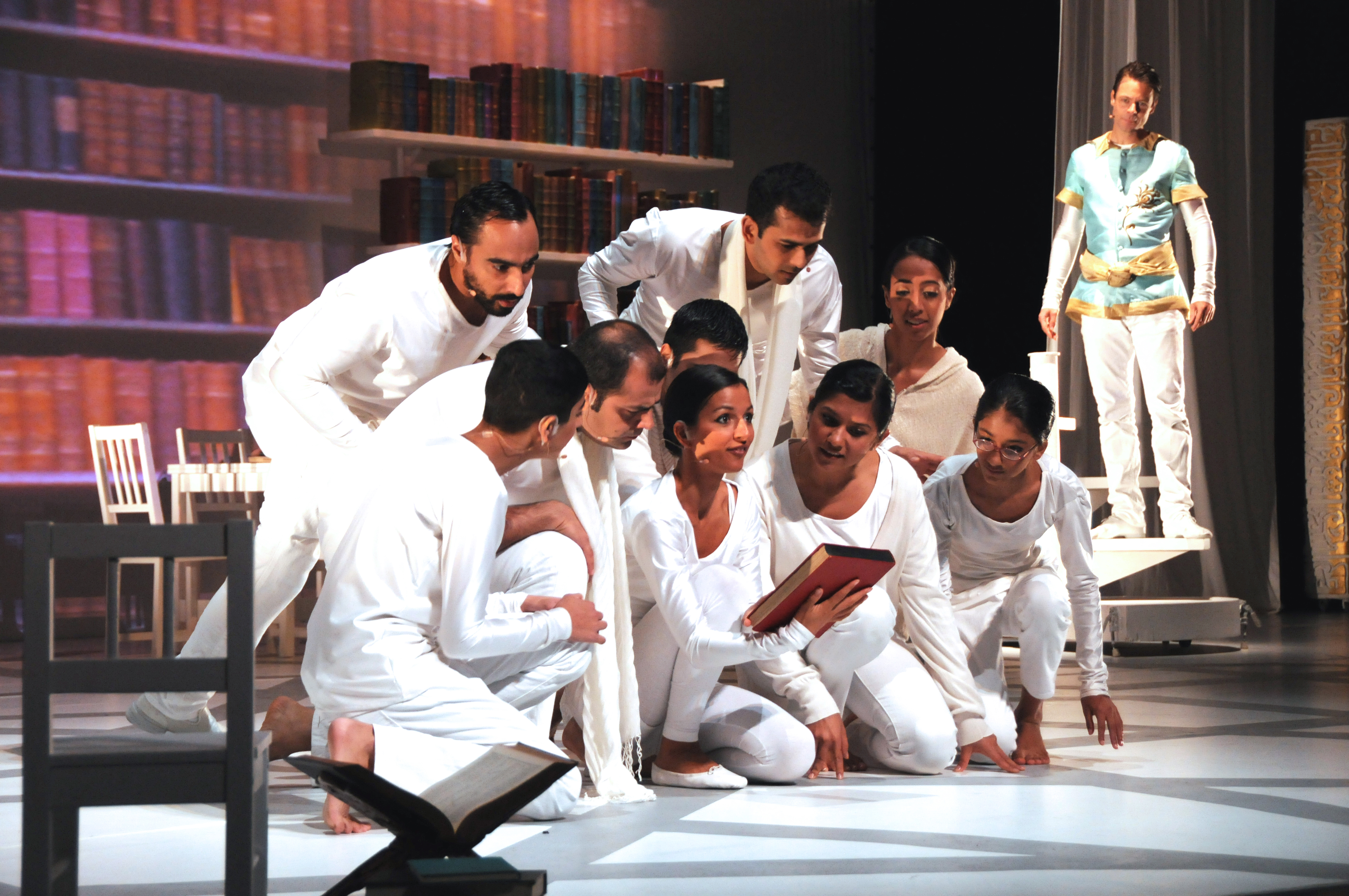 Ali to Karim scene: Reading The Ismailis in the library. Hyder Ali