Skip to main content
The.ismaili > Global > Speech at the Opening Ceremony of the Ismaili Centre, Lisbon 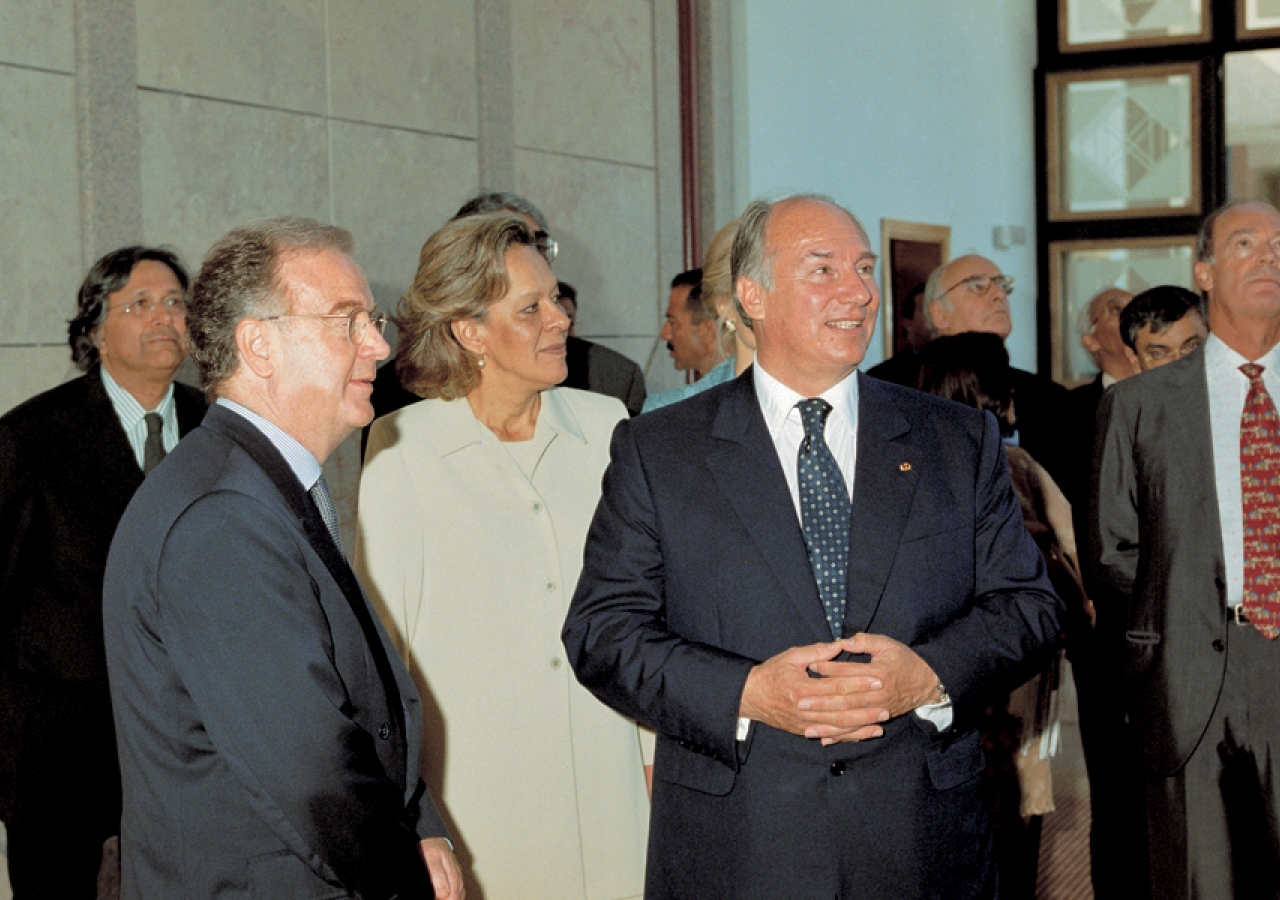 Speech at the Opening Ceremony of the Ismaili Centre, Lisbon

Speech by Mawlana Hazar Imam at the Opening Ceremony of the Ismaili Centre, Lisbon on Saturday, 11 July 1998.

Before addressing you about the Ismaili Centre, please let me express our sympathy and concern, on behalf of the Ismaili community of Portugal and myself, for the people of the Azores who suffered so terribly in Thursday's earthquake. Large segments of the world's Muslim population, including the Ismailis, reside in zones of the world which are subject to seismic disturbances, so we are very familiar with their destructive consequences, and the trauma that lingers in their aftermath. We therefore share, in a particularly personal manner, in this tragedy.

Despite these sad circumstances, it is a distinct honour and a very great pleasure for me to welcome you to this special place on this important day.

This is an occasion charged with symbolism. Each of its elements carries meaning that is rooted in rich history, while also reaching confidently and optimistically into the future. First there is this gathering of distinguished individuals and the many institutions and activities they represent. Next there are the exciting spaces and places of these new buildings, fine additions to the number of Ismaili Centres in major cities around the world, and to Lisbon's rich collection of distinctive structures, historic and contemporary. Finally, today is a very special day for the community I lead, and for me personally, the 41st anniversary of my accession as Imam of the Shia Ismaili Muslims as designated by my grandfather and predecessor, Sir Sultan Mahomed Shah, Aga Khan.

May I begin by expressing my gratitude to all those individuals who have contributed to making possible this day, and what it commemorates. I would start by thanking the Government of Portugal for the supportive welcome it has extended to the Ismaili community over the years. This policy has enabled a community, many of whom arrived essentially as refugees from Mozambique and other parts of Portuguese-speaking Africa and Asia, to reconstitute itself and become productive and contributing members of Portuguese society within one generation.

The inauguration of the Centro Ismaili today symbolises both the welcome accorded by the Government of Portugal, the response of the Ismaili community to this land of harmony and opportunity, and its permanent commitment to Portugal. These new buildings and the spaces within and around them, are rich in symbolism; drawing on the plurality of cultures which characterise Ismailis here, and around the world. The array of facilities included is a reflection of the core values of the Ismaili community, its organisation, its discipline, its social conscience, the importance of its community organisations, and its attitude toward the society in which it exists. In addition to the prayer hall, there are classrooms, meeting rooms, offices for the Aga Khan Development Network, a lecture and social hall, and exhibition spaces. I thank the Government for its assistance in the development of this very special centre as the permanent focus of the community's spiritual and social activities, and a base for its continuing contribution to the life of the country.

I would also like to thank the City Council for assistance in obtaining the site for the Centre, and His Worship Mayor Joao Soares, and his team of city officials and staff for their understanding and support through all of the phases of what has been a very complex project. Among all his other duties and responsibilities, His Worship honoured us and this project by taking the time to approve the building permit personally. A great deal of construction has taken place in this wonderful city in the last few years. We have appreciated the helpful attention of the City's officials during a period of great activity and extreme pressure on all.

This is also an appropriate occasion to acknowledge and thank those who have made possible the actual construction of the Centre:

It is to the future that I would now like to turn my attention. We live in a time of accelerating change, evidence of which surrounds us on a daily basis. Change can mean stimulation, opportunity, and hope, but it can also mean disorientation, dislocation, and even conflict. Change can mean progress, but it can also mean that special efforts are required to improve access to the benefits of development for those less prepared to take advantage of them.

These countervailing forces of change are of great interest to me because Ismailis have felt their full brunt over the course of their long history. But even more importantly, they are a matter of religious concern. Islam teaches Muslims to strive to achieve equilibrium between human existence and the Absolute, and therefore to attend to both spiritual and physical needs. As Imam of the Shia Ismaili Muslims, my responsibilities extend to both the spiritual and the material welfare of the Ismaili community.

Pursuant to supporting improvements in material well-being, I have created a number of development agencies, known collectively as the Aga Khan Development Network. The Network is a family of institutions sustained by the Imamat and the Ismaili community to realise the social conscience of Islam through institutional action. The agencies of the Network have distinct but complementary mandates with respect to economic development, social development, and the enhancement of culture. They work in countries where Ismailis reside, addressing problems experienced by citizens, irrespective of their ethnicity or religion.

Although my faith and office place upon me a distinctive perspective and role, I am most certainly not alone in my concern about the pace and direction of change at this moment in history. In recognition of the critical problems of human welfare confronting today's world, the role faiths can play in contributing to their resolution, Dr George Carey, the Archbishop of Canterbury, and Mr James D Wolfensohn, President of the World Bank, convened a Dialogue on “World Faiths and Development” earlier this year. Leaders of nine world faiths participated: Baha'i, Buddhist, Christian, Hindu, Jain, Jewish, Muslim, Sikh, and Tao. Within each, the major traditions were represented, the Christians by both Catholic and Protestant leaders, the Muslims by leaders of Sunni and Shia communities.

The Dialogue took the form of an open and wide-ranging exchange of views among the participants. It concluded with a public commitment to continue the Dialogue and to the development of specific follow-on activities. Several points emerged which are important and encouraging. I was particularly struck by the degree of commonality in the ethical basis that motivated and guides the development work of the faiths. To find that similarity in Judaism, Christianity, and Islam, all of which share common Abrahamic roots, was anticipated and comforting. But to discover the extent and strength of comparable formulations among the religions that have their origins further East was exhilarating for our common goals.

The Dialogue has now moved to the creation of working groups with membership drawn from both The World Bank and the faiths. They are charged with drawing lessons from successful projects addressing some of the most pressing problems of our time: food security, post-conflict reconstruction, delivery of social services, and the role of the culture and cultural institutions for healthy societies. This process will focus on the work of faith organisations in different geographical settings, and will seek to identify best practices. One goal is to lay the ground-work for co-operation between faith organisations and development organisations including The World Bank. Another, and it is one to which I attach particular importance, is to explore the potential for cooperation between faith organisations in settings where interests are shared and the environment enabling.

In this connection, I would like to compliment the Government of Portugal on the Law of Religious Freedom currently being discussed in the country. It is a pioneering and forward-looking undertaking that will encourage a new era of religious freedom, respect, and equality for over 60 different religious communities in the country, while maintaining the historic role of the Catholic Church. The draft Law on Religious Freedom can serve as a model for the rest of the European Community, where populations have grown more ethnically and religiously diverse in the past three to four decades.

In a more immediate sense, I believe that the proposed law will provide a basis for a greater cooperation between faith communities in Portugal along the lines envisaged in The World Bank's Interfaith Dialogue. If experience elsewhere is a guide, we can expect the release of much energy and creativity, and the Government and people of Portugal should be assured that the Ismaili Centre of Lisbon, and all those it represents – the Ismaili community world-wide, and the agencies of the Aga Khan Development Network – will devote their energies to making Portugal's leadership in this creative and uniquely exciting initiative the success it must be. Social harmony coupled with the freedom and respect of religious expression is a prerequisite for all human progress.