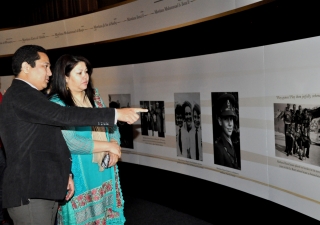 RAYS OF LIGHT: Glimpses into the Ismaili Imamat, a Golden Jubilee International Programme depicting the first 50 years of Mawlana Hazar Imam’s Imamat, completed its Canadian tour in Toronto last week. The exhibition is set to open in Dar es Salaam, Tanzania next month. 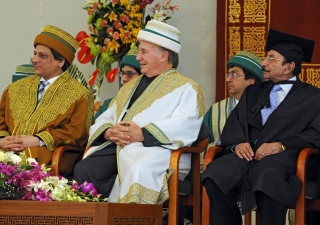 Karachi, 19 December 2013 – Mawlana Hazar Imam set out a bold vision for the Aga Khan University, an ambitious challenge that will see it evolve into “a distinguished liberal arts university” over the next few decades. Presiding over the 26th Convocation of the University, Hazar Imam also announced the creation of seven graduate schools. 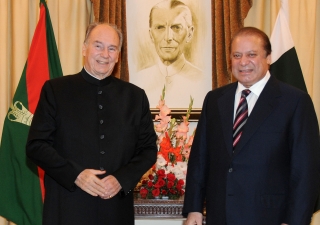 Islamabad, 16 December 2013 – In separate meetings with the President, the Prime Minister, the Advisor to the Prime Minister on National Security and Foreign Affairs and the Finance Minister of Pakistan, Mawlana Hazar Imam received praise for the leadership role taken by the AKDN in the country’s development, and for its effectiveness in improving the quality of life of those whom it reaches. 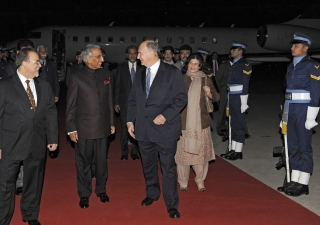 Islamabad, 15 December 2013 – Mawlana Hazar Imam arrived in Islamabad this evening, commencing an official visit to Pakistan. During the visit, Hazar Imam will meet with government officials, attend to AKDN related matters and preside over a convocation of the Aga Khan University. 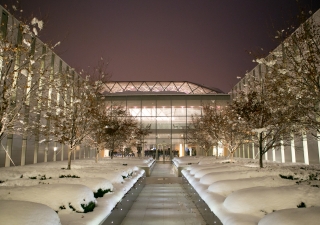 Ottawa, 27 November 2013 – In a ceremony held at the Delegation of the Ismaili Imamat, Mawlana Hazar Imam was lauded by the Royal Architectural Institute of Canada, who presented the Imam with their highest honour – the 2013 Gold Medal. In his remarks, Hazar Imam expressed his gratitude and went on to describe the connection between architecture and quality of life, explaining how the Ismaili Centres embodied for the Jamat the hopeful aspirations of a forward looking community. 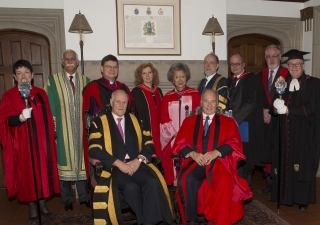 Toronto, 25 November 2013 – The University of Toronto’s Trinity College held a special convocation this evening, to bestow upon Mawlana Hazar Imam the degree of Doctor of Sacred Letters, honoris causa. In a glowing citation, the Right Honourable Adrienne Clarkson, presented Hazar Imam before the Chancellor of Trinity College. 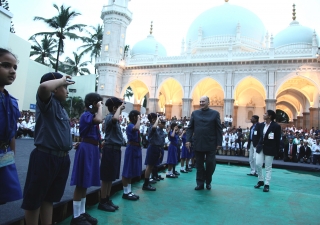 Mumbai, 28 September 2013 – Mawlana Hazar Imam’s 11-day visit to India drew to a close today. During the visit, which included a ceremony marking the restoration of Humayun’s Tomb and the inauguration of the Aga Khan Academy, Hyderabad, the Imam met with senior government leaders at the national and state levels. Hazar Imam also devoted a considerable amount of time to meeting with the Jamat of Western India, who gathered at Hasanabad Jamatkhana.

The recently inaugurated Aga Khan Academy in Hyderabad is one of the few schools in India to combine a rigorous academic programme with a rich array of co-curricular activities on a state-of-the-art residential campus. It also benefits from being part of a global network of Academies for which shared values and pluralistic ethos are an inspiration to the school’s students. 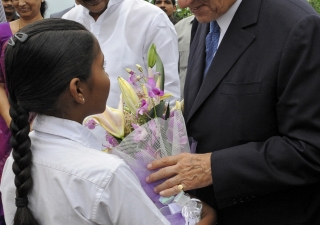 Hyderabad, India, 20 September 2013 –The Aga Khan Academy, Hyderabad, the second in a global network of 18 schools, was officially inaugurated by the Chief Minister of Andhra Pradesh and India’s Minister for Human Resource Development in the presence of Mawlana Hazar Imam. 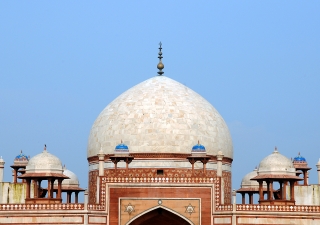 Delhi, 18 September 2013 – The restoration of the 16th century garden tomb of the Mughal emperor Humayun was inaugurated in Delhi today. Mawlana Hazar Imam, the Prime Minister of India, Dr Manmohan Singh, the Minister of Culture, Chandresh Kumari Katoch, and Chairman Ratan Tata of the Sir Dorabji Tata Trust presided over the ceremony together, a reflection of the public-private partnership that was pivotal to the project’s success. 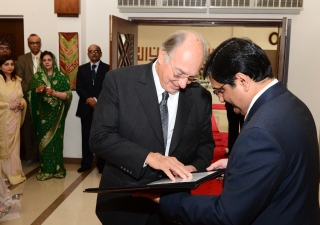 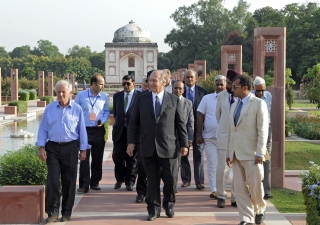 Delhi, 17 September 2013 – Mawlana Hazar Imam arrived in India today, starting a 10-day visit during which he will join Prime Minister Dr Manmohan Singh in marking the completion of the restoration of Humayun's Tomb. He will also inaugurate a new Aga Khan Academy in Hyderabad.