In his remarks at the inaugural Aga Khan Music Awards in 2019, Mawlana Hazar Imam said, “after all, art is a matter of humanity just as much as it is a matter of identity.” Ismaili youth across the globe have been embracing art in this very spirit, to express, appreciate, and propel their emotions, thoughts, and passions in an outstanding way.

Growing up, Taniya Dharani never had any art-inclined friends or classmates, or even knew anyone interested in the traditional artistic practices. Being the first-ever International Baccalaureate visual art student at the Aga Khan Academy, Hyderabad, she was constantly told by her peers that painting will not help her earn money, but she planned to challenge this narrative.

“The fact that artists are a minority intrigued me and I was curious to walk this path,” she said. 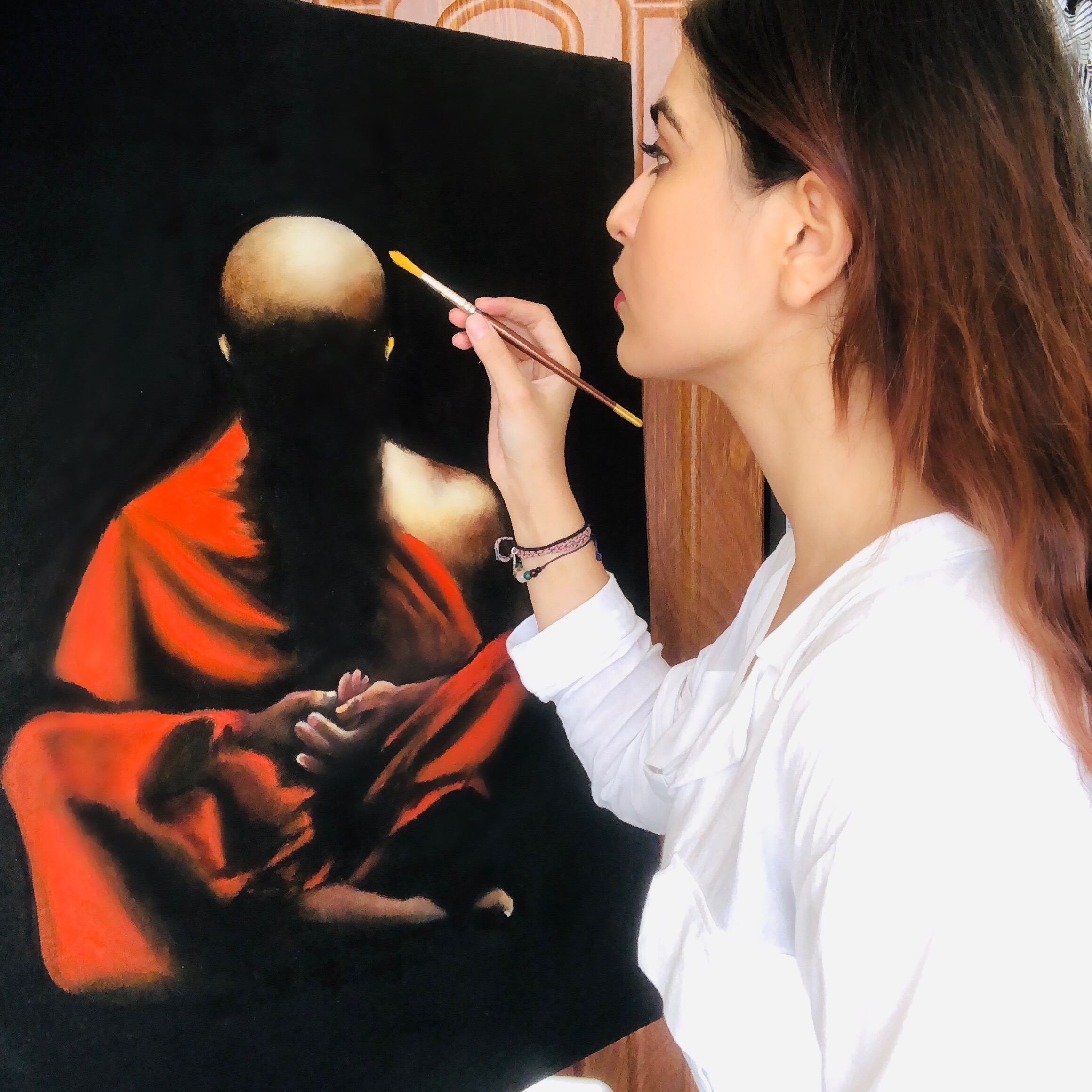 After graduating from the Aga Khan Academy in 2014, Taniya, 25, made her way to the University of Reading in England to pursue her passion and paint at a degree level, something she had wanted to do all her life.

“Growing up, I realised that the only thing that ignited a fire in me was holding a paintbrush in my hands and dripping paint all over my clothes. It made me feel like all is well in my world, even when almost everything in life was falling apart,” she said.

Therefore, her paintings mainly explore the isolation of an alienated mind, human psychology, and emotion, having experience in realistic drawing, classical drawing, and painting.

“I enjoy portraying my emotions through vivid bright colours in a contemporary style,” she said.

Upon graduating, Taniya came back to the Academy as an intern to give back to a place she describes as a pillar for her, alongside her parents, who she says supported her dreams, no matter how unique. Last year, she also facilitated a brand new initiative called ‘Project Art’, where different types of contemporary art styles were virtually taught to Ismaili children of various age groups in India.

“I have a lot of students, children, and seniors who reach out to me personally when they want to start painting as a hobby or take it up as a profession. I am extremely happy to be helping and guiding them throughout their progress, whether they paint to earn, express, learn, or to reflect,” she added.

But to her, art is more than just painting, and she saw a lot of extremely skilled and talented Ismaili artists who are a minority as a culturally, ethnically, or racially distinct group, and were unaware of the platforms available to them. So, this led her to explore the art world from a commercial perspective this year when she enrolled in an MA programme in Art Business at Sotheby’s Institute of Art, London.

“The art world is not as simple as it looks. It is not just painting and selling it, there are a lot of factors that need to be put in place to reach the ultimate goal as an artist... I hope to create an art advisory firm and art gallery to promote emerging artists,” she said.

Bringing diversity to the silver screen

Shakil Jessa, 19, was always inclined to perform from a young age. He would spend hours dissecting films, researching the actors, and envisioning himself on the big screen. However, he never saw a lot of people who looked like him on screen.

“What drew me to the professional [acting] industry was the fact that I didn’t see many people who looked like me being represented on TV, and if I did, they were inauthentic stereotypes of who South Asian and Muslim people are,” he said. 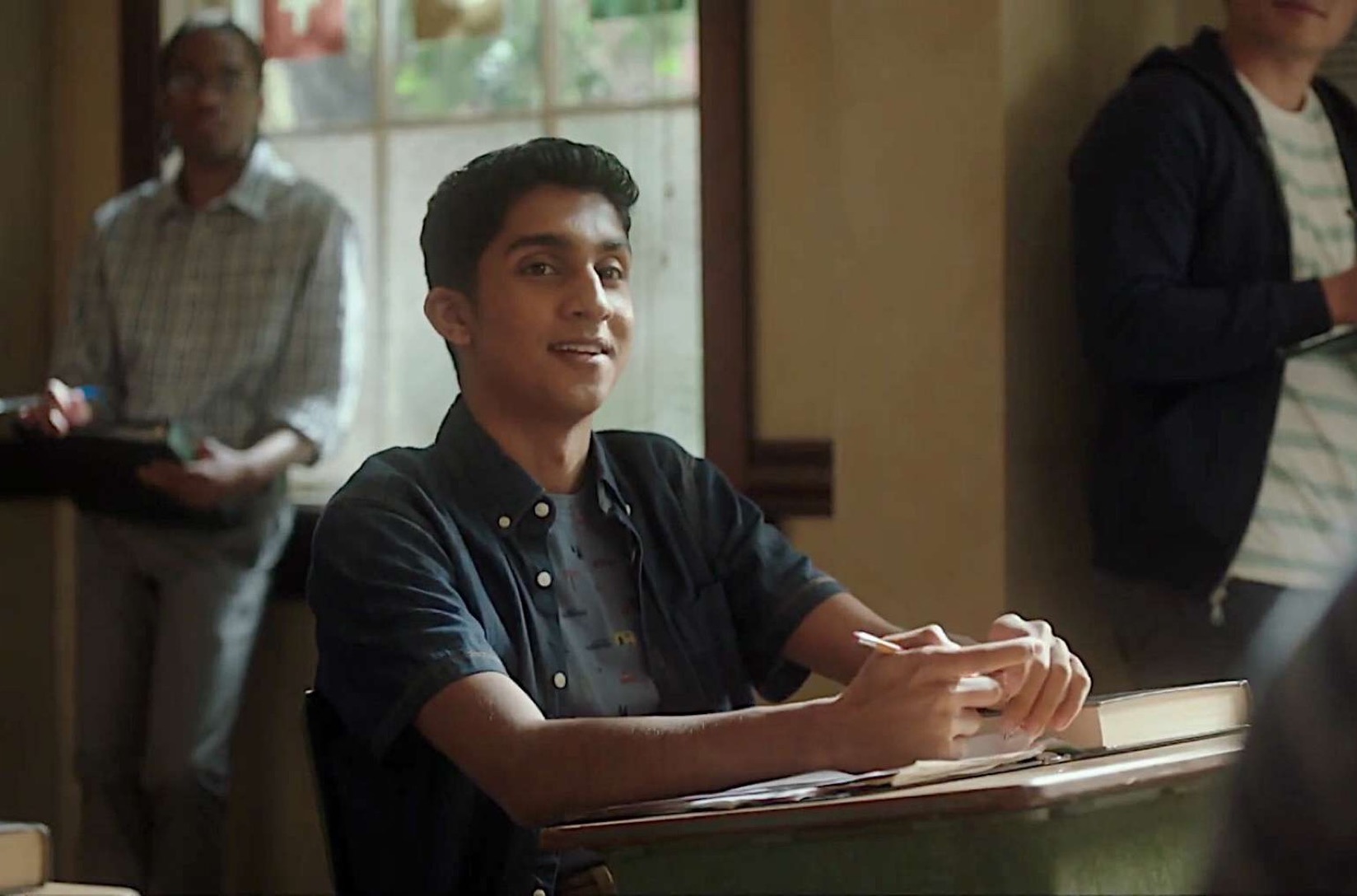 Shakil has been taking acting classes for the past year in Vancouver with Beatrice King, who he considers an incredible mentor and coach. In an industry where it can feel very lonely, he appreciates his agency team for its support and which also helped him get cast in his first network television show, Riverdale, in 2020.

“[This] was a huge milestone for me!” he added.

To him, the industry has been getting better at authentic storytelling and putting more people of colour behind the cameras as well as in front of them, but there is still a lot of work to be done. The lack of diversity in television is a systemic issue and stereotypes can have real-world implications.

“As Muslims and people of colour, it’s important that we get the opportunity to tell our own stories authentically.”

Before the pandemic, he was working with the British Columbia Jamat to prepare to put on the play “Pathways” (directed by Ziyana Vasaya and Sabrina Vellani), which he believes would have been an incredible showcase of local talent. He hopes they can put it on sometime soon when pandemic restrictions are lifted.

“I was set to play Aamir, one of the show’s leads who is balancing fitting in with his friends and his discombobulated family life. The show talked about some important issues that young people in our Jamat face,” he added.

Therefore, for him, creating his own projects is important. He has been writing a passion project on the side that tells a story he wants to see on TV.

“This project has been able to ground me, keep me motivated, and is something I can always turn to when I’m looking for that little creative boost... No one else can tell your story… you have got to do it yourself.”

While continuing his business degree at the University of British Columbia, Shakil wants to also keep developing his comedy pilot about a Muslim teenager navigating high-school, friends, and romance entitled “Coming Up”. He hopes to put a team together and develop the series by collaborating with Muslim creatives from around the world.

Afraaz Mulji, 22, has always been fascinated by sound, particularly the production and manipulation of sound, having now devoted his life to it and its process.

“The abstract and esoteric nature of music and the freedom it grants the practitioner to question its very ontology, have been the gravitas that drew me into its unavoidable vortex,” he said. 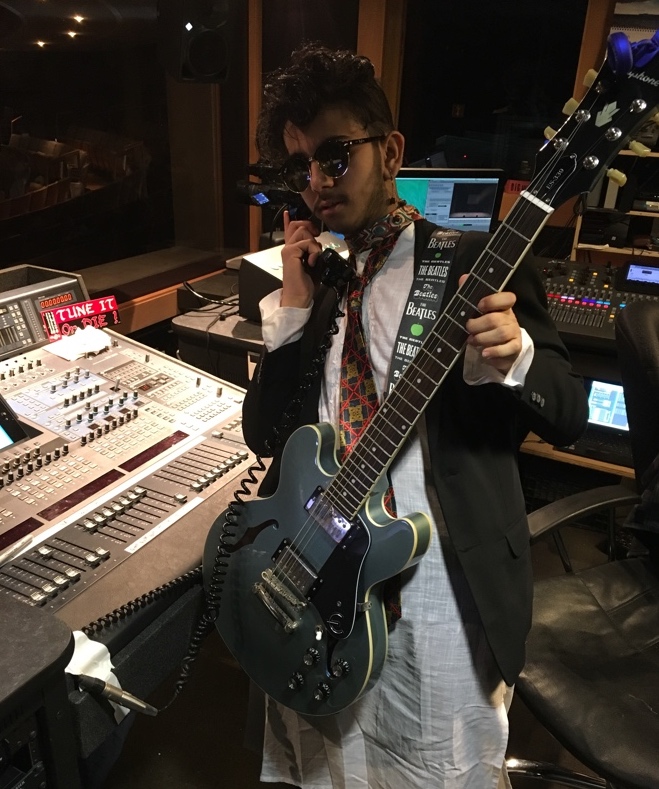 He describes himself as a curator and connoisseur of the conceptual frameworks that underpin sonic interactions and intersections. He also says he is a conceptual installation artist working in many mediums, including poetry, sculpture, film, and painting. His fascination in blurring the line between reality and virtual reality in the context of experiences, have led him to design an instrument called The Infinite Sonic Possibility Interface, which he says is his life’s work.

“I am a critical participant in the fields I have chosen to work in... I have gotten to where I am through sheer audacity, nerve, determination, wit, and willpower. I also have had the privilege of the received wisdom of many traditions through my mentors and guides.”

For him, the world has become a knowledge economy, and as such, the work that he has chosen in music fits perfectly into the notion of intangible careers that are non-existent or have yet to emerge.

“Hazar Imam has asked the Jamat to embrace pluralism and lifelong learning, and I aim to live and embody these values and ideals through my practice and life. They guide my every motion and are the compass I follow.”

In the past, he has led workshops and forums on design and conception in Dar es Salaam and Toronto, and created soundtracks for audiobooks. The Aga Khan Music Initiative and Aga Khan Museum have directly or indirectly been patrons and supporters of his work, while Jamati institutions in the UK, Tanzania, and Canada have also championed his work and given him opportunities and ways to serve the Jamat via TKN assignments.

However, he has faced opposition and animosity from elsewhere for doing things differently than traditional or established ways of engaging with music or the arts. But his attitude has always been if you can do it better and more effectively or interestingly, then do it.

“The work will be the proof of concept, and speak louder than any argument or challenge…[I see these] as a playground or sandbox for my imagination.”

Afraaz is currently preparing installations in Tanzania, in collaboration with the Alliance Francaise and the French Embassy.

“I wish to continue contributing to the artistic and knowledge societies of the world. I believe in the power of art to give meaning to our existence and create tangible and profound civil societies.”

Treading the path to financial success