This article is part of The Ismaili’s Enhancing Civil Society series, in which we highlight stories about members of the Jamat who contribute to private initiatives for the public good.

Universities are known for making a positive contribution to their neighbourhood. They act as a hub of employment, knowledge creation, and general upliftment of the local area. The University of Central Asia (UCA) aims to go a step further by offering its students the autonomy to launch their own projects intended to bring positive change to the local community.

This autonomy has led to various creative initiatives at UCA’s Naryn campus, including Razakar.

Razakar is a community service student organisation, operating since 2018. The term comes from the Persian language, Riza meaning “free will” and Kar meaning “work” or “deed.” Together it translates as “volunteer.” Razakar’s mission aligns with UCA’s broader objective to promote social and economic development in the mountainous communities of Central Asia.

“When at UCA, I learned about Razakar, and I was very impressed by the work they do,” recalls Nuriya Mullo-Abdolova, a junior Communications and Media student who joined the initiative two years ago. “With the help of small but very fruitful actions, they improve the life of Naryn’s people by working with the students, fundraising, and other forms of support.”

Since 2018, Razakar’s student volunteers, who come from across Central and South Asia, have been serving the local community in education, the environment, social development, and life skills. 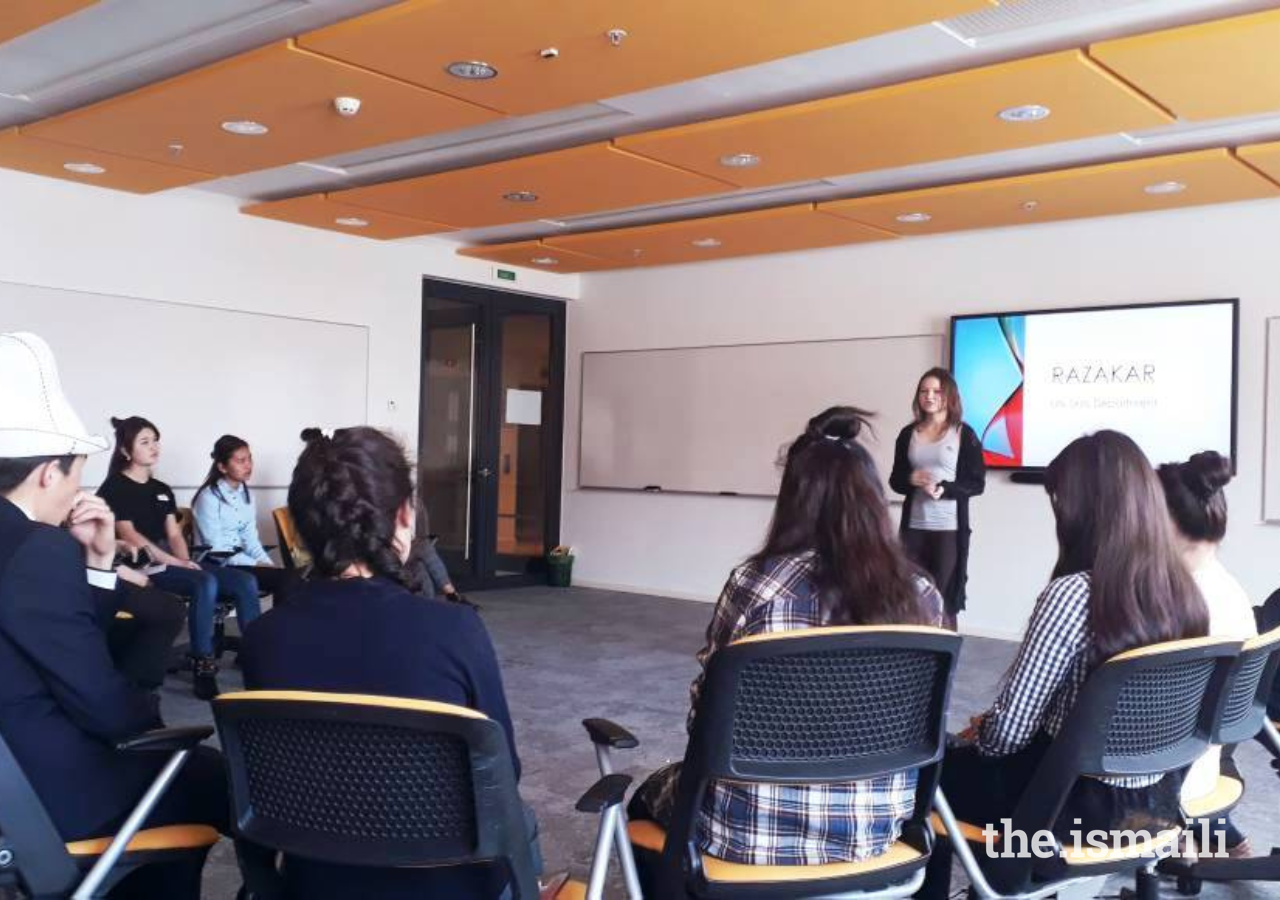 The academic arm of the volunteering group works largely on educational services. Students have organised mathematics tournaments for high school students, in order to identify talented students from Naryn, and they also offer a weekly English Language Learning Programme to local schools to promote participation in the global knowledge society. Some of these students were later admitted to UCA.

All Razakar volunteers — but especially those from its environment department — have dedicated many hours towards community clean ups and to collect trash and thousands of plastic bottles from areas close to the campus, the Naryn river, the local botanic garden, and other locations in the town. They also help to raise awareness among the local community about the environmental crisis our planet is facing, and the simple and practical steps humans can take to better protect the environment, such as sorting trash and recycling.

In addition, a regular clothing drive has become something of a tradition for Razakar. Organised twice a year, once during each semester among the campus community, donated clothes are offered to a local Crisis Centre that Razakar volunteers have partnered with and often visit. UCA’s many other clubs and student initiatives are invited to collaborate on such activities to multiply the results.

Members of the Life Skills department have organised workshops and training sessions for local youth on effective communication, mental health, self-development, empathy, creativity, critical thinking, and problem-solving. The activities are often supervised by the University Counsellor. Such sessions are especially important in today’s world, although are sometimes missing from high school curriculums.

The Covid-19 pandemic has created challenges for Razakar, as it did for the rest of the world. For almost a year, students were away from campus and their planned projects were put on hold. With the re-opening of the campus, however, volunteers are back, serving both remotely and in-person in a safe way.

“Fun and fulfilling activities that the Razakar team organises are appreciated by the local community,” says Irina Onipchuk, a former Manager of Community Outreach at UCA’s Naryn campus. “They impact people’s quality of life for real.”

Razakar’s student volunteers, who come from across Central and South Asia, serve the local community in the areas of education, the environment, social development, and life skills.
Photo: UCA