Nasir Khusraw was a major Muslim intellectual, philosopher and traveller of the 11th century, and a prominent Shia Ismaili Da‘i. A new digital resource from The Institute of Ismaili Studies makes his famous Safar-nama accessible in a way that it never has been before.

Nasir Khusraw was a major Muslim intellectual, philosopher and traveller of the 11th century, and one of the greatest authors in Persian literature. He is also revered as a prominent Shia Ismaili Da‘i of the Fatimid era (10th- 11th century).

In the mid-11th century, Nasir Khusraw undertook a seven-year journey from Central Asia to the Mediterranean coast, Egypt, Arabia and back again. Along the way he recorded detailed notes, which he later compiled into his most famous work: the Safar-nama (literally “Travelogue”).

A new digital resource from The Institute of Ismaili Studies (IIS) makes the Safar-nama accessible in a way that it never has been before.

An international team of volunteer Ismaili professionals collaborated with researchers at the IIS to develop an interactive map that traces the footsteps of Nasir Khusraw and his companion on their epic voyage. Each location on the map is linked to an excerpt from the Safar-nama narrative, together with detailed information about the place and its history, including images as well as links to useful research and resources. 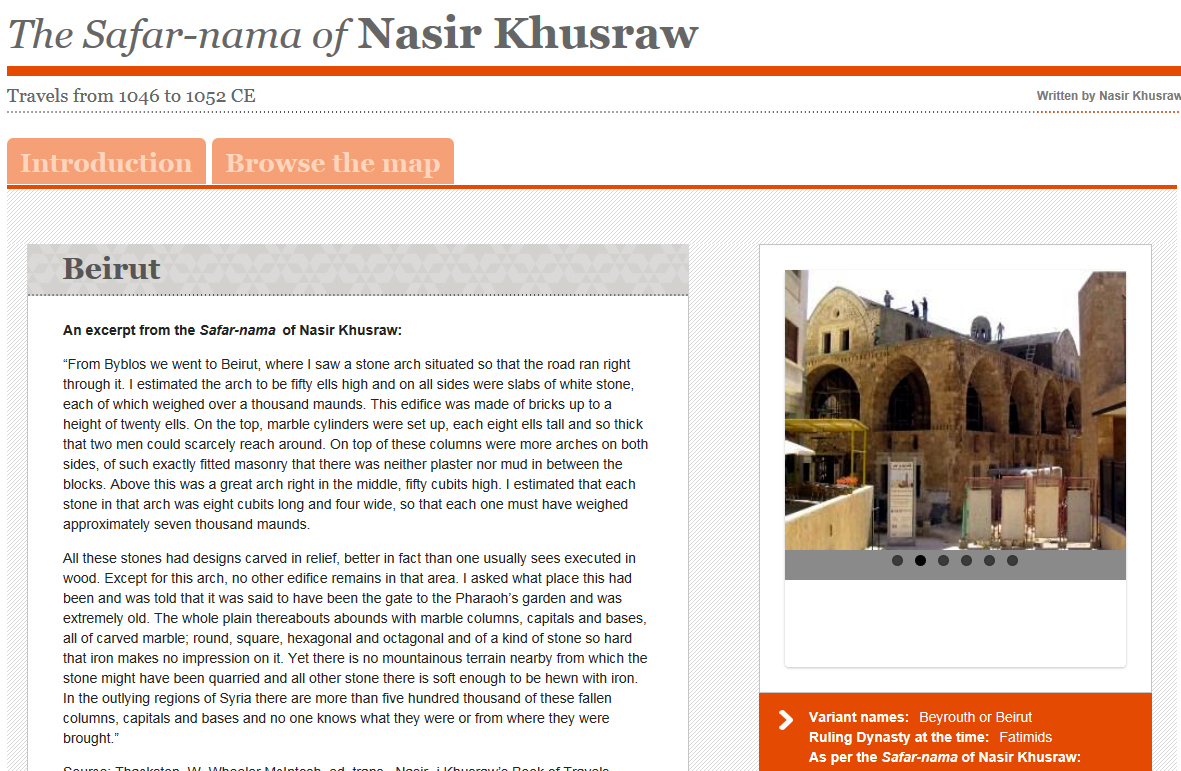 Each location on the digital map reveals detailed information about the place and its history, including images as well as links to useful research and resources. Courtesy of The Institute of Ismaili Studies

In addition, a timeline feature provides information about the ruling Muslim dynasties at the time, including the Abbasids, Fatimids, Ghaznavids, the Great Seljuks and Anatolian Seljuks.

Visitors can also watch videos of IIS scholars like Dr Alice Hunsberger – author of Nasir Khusraw, the Ruby of Badakhshan – who looks at his life and times, and Professor Eric Ormsby, who elucidates the philosophical writings of the Da‘i. Professor Ormsby quotes from his English translation of the Jami al-hikmatayn, Between Reason and Revelation, which is considered by some to be the “crowning and final work” of Nasir Khusraw.

The idea of bringing Ismaili heritage, and the life and times of Da‘i Nasir Khusraw forward to the present day resonated with the volunteers who came together around this project. Working remotely and often in different time zones, they were able to forge a relationship based on a common desire to share their knowledge and pool their expertise to create an accessible learning tool.

“I was excited to be able to experiment with new design concepts that had not yet been used on the IIS website” says Nazira Lakhoo, who was able to share her specialist design and illustration skills on this project. In her professional life, Lakhoo heads a digital media design team in the United Kingdom. “I really wanted users to feel that they are actually part of this historical journey, that they are able to virtually experience Ismaili history and its components,” she adds. 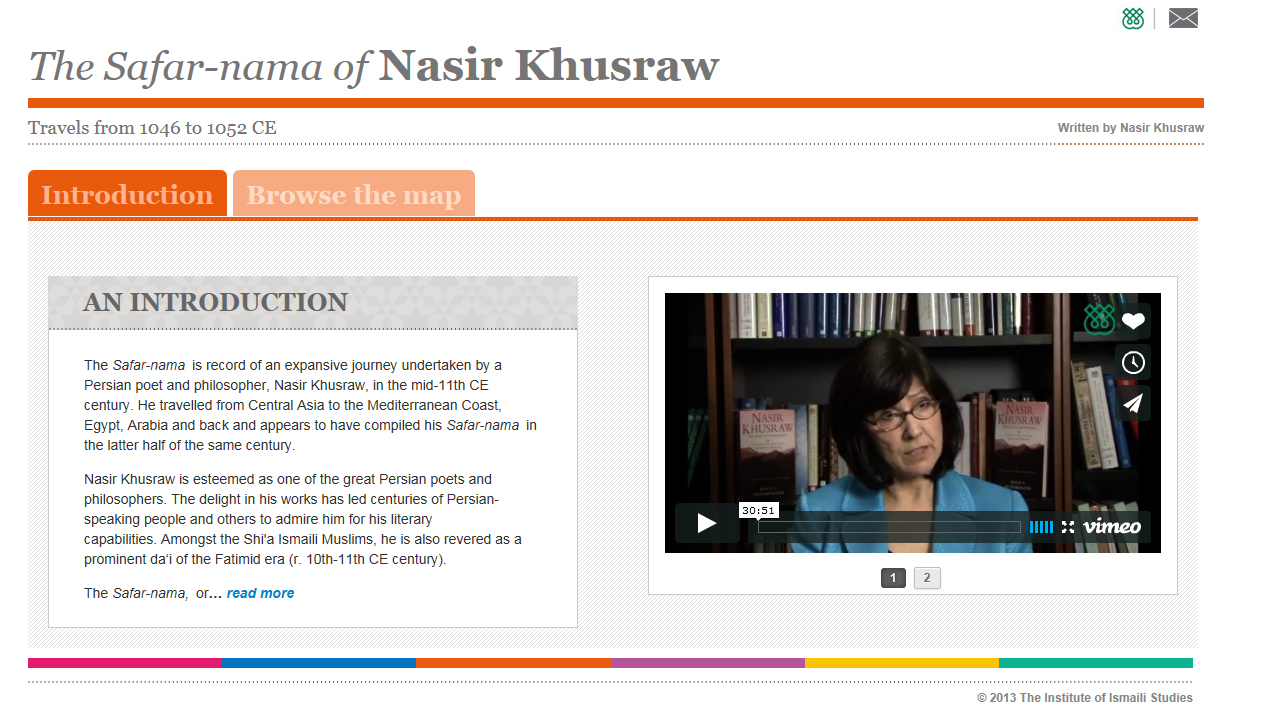 Watch videos of IIS scholars discussing the life and times of Nasir Khusraw, and sharing their personal readings of his “Safar-nama”. Courtesy of The Institute of Ismaili Studies

Altaf Samnani from Amsterdam, who was part of the web development effort, agrees. “The project was about digital adaptation of Nasir-i Khusraw's travel map,” he says. He liked the idea of a space on the web “where people can go by themselves and explore Da‘i Nasir Khusraw's journey.”

The team members collaborated remotely, working from different countries and time zones. Rather than allowing this to complicate their effort, they made this work in their favour.

“Our team consisted of people who were communicative, cooperative, problem solvers and respectful individuals,” says Samnani. Front-end developer Shafique Alibhai agrees: “It provided an amazing experience to work with the best of talents from the IIS and our Ismaili community.”

The volunteers all agreed that they each learnt a lot from the project about their own history and the life of Da‘i Nasir Khusraw. Drawing on historical and primary source material from a range of sources, including the Aga Khan Trust for Culture's Archnet.org and the Aga Khan Museum collection, the online resource complements the range of IIS academic publications, Ta‘lim and Secondary Curriculum resources. It currently features 28 locations from the Safar-nama, with plans to add another 16 in the near future.

“Each member of the team showed utmost professionalism and commitment to the work,” says Zehra Lalji who lead the project in her capacity as Website Research and Productions Officer at the IIS. “We are proud to have had the support of such talented volunteers from the Jamat who contributed with the best of their time and knowledge on the project.”

Kindle the candle of intellect in your heart
And hasten with it to the world of brightness;
If you want to light a candle in your heart,
Make knowledge and action its wick and oil.

– From The Candle of the Intellect by Nasir Khusraw, translated by F.M. Hunzai in Shimmering Light, published by The Institute of Ismaili Studies. 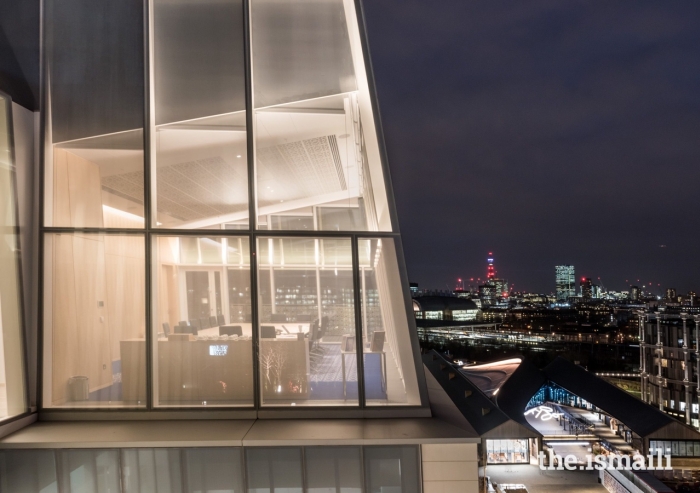 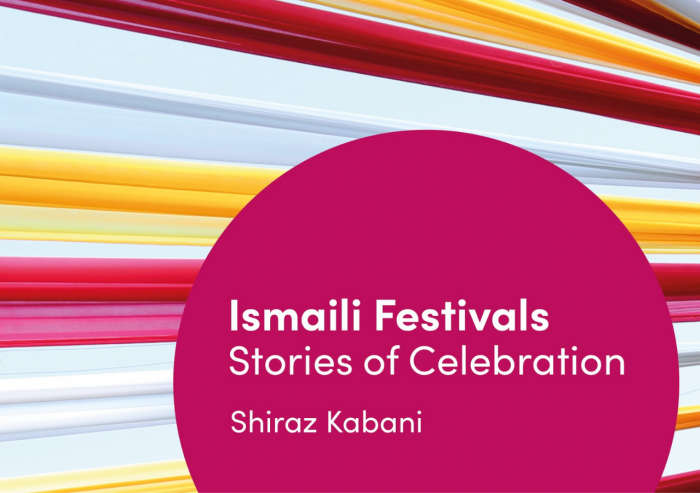