Harmony and service elevate birthday celebration to the global stage

The milestone celebration of Mawlana Hazar Imam’s 80th birthday engaged artists from the diverse traditions of the Ismaili community in “a musical and cultural conversation.” And ensuring that within hours of the event, the worldwide Jamat could witness the celebration in a multiplicity of languages, was no minor feat.

What does the song of a united global Jamat sound like? What notes, rhythms and lyrics do musicians compose when they come from all corners of the globe; when they are bringing together the heritage of diverse Ismaili Muslim traditions?

And — most importantly — how do they join in harmony to perform a musical offering for the Imam of the Time, on the occasion of his 80th birthday, and on behalf of all of his murids around the world?

Making music as one

“We came together not with the intention to present music from the North, or music from the South, or the West, or the East,” says Hussein Janmohamed. Nor to “present a palette or buffet of international sound that we could all taste and go home.”

Janmohamed served as the musical director and also performed alongside fellow artists from the Jamats of Afghanistan, East Africa, Europe, North America, Iran, South Asia, Syria and Tajikistan at the celebration of Mawlana Hazar Imam’s 80th birthday, which took place at his residence at Aiglemont, France on 16 December 2016.

Rather than simply have the artists perform pieces from each tradition, the goal was to find a way to bridge the unique musical traditions in a creative and collaborative manner.

“What we are trying to do here is to increase our understanding of what it means to be part of one Jamat, united by our allegiance to, and love for, the Imam of the Time,” explains producer Nina Hirji Kheraj. “By bringing musicians from around the world — broadly representing six geographic regions — to make music together, we engaged in a musical and cultural conversation.”

“We’re not playing: Syria plays, Afghanistan plays, Tajikistan plays, South Asia plays,” she continues. “We were playing together. We allowed ourselves to be curious about each other and we found a new language and way of being, We’re in a musical and cultural conversation.”

Engaging in that conversation drew the group together. Many of the 20 artists had not previously met — their encounters and collaboration began via remote video connection only three weeks prior to the event. Arriving in France on 9 December gave them a few days to get to know one another and to find their harmony in person. Each individual brought a unique voice, a different sound and a depth of talent.

“We were trying to work with each other, and at times this was not easy,” recalls Soibegim Davlatshoeva, a singer from Tajikistan, who is a member and artistic director of the Badakhshan Ensemble. But “music is in the heart, and there are similarities in our music. And from each we have picked a flower and created a bunch of flowers.”

In her remarks introducing the performance to Mawlana Hazar Imam, his family and all those who were present, Nina Hirji Kheraj spoke of the lessons and the rewards in the group’s journey towards musical pluralism.

“We learnt that talking about pluralism is not the same as engaging with it,” said Hirji Kheraj. “We had to learn to cede ground, to be fluid and flexible, to be open-hearted and open intellectually. We learnt to extend the generous hand of friendship and brotherhood, and we learnt that it takes effort. It is not always easy, but the rewards are sweet.”

The struggle to find unity made the end result that much more meaningful for the performers, according to Samidha Joglekar, a singer from Canada.

“If there is a moment of unity or harmony in the music you really appreciate that more when there’s been cacophony before that,” Joglekar says. “I think that’s a metaphor for, maybe, our existence. You can’t have unity unless you go through that.”

Delivering to the world

While the artists endeavoured to find their music, another group of equally dedicated volunteers grappled with a daunting technical challenge: capturing and transmitting the entire birthday celebration to the Jamat around the world — in record time!

Screenings of a video of the event had been organised to take place the following day in Jamatkhanas around the world, with each gathering expected to draw hundreds or even thousands of viewers. There was no room for disappointment, and little time to spare.

The Friday birthday celebration finished after 11:00 PM in France. The production involved not only the live filming of the event, but also pre-producing several features, and a very tight window to edit and turnaround the final product. Due to the time zone difference, the first Jamats in New Zealand and Australia were due to show the video less than 12 hours later.

The Jamat was appreciative. Salma Premji, a member of the Sydney Jamat, felt moved at witnessing “the Noorani family with global Jamat leaders together celebrating our Imam’s birthday.” Especially, she says “knowing his entire adult life has been dedicated to us.”

Abdul Tejani, also from Sydney, was glad to have the chance to experience the event together with the rest of the Jamat. “It was great to see Mawlana Hazar Imam celebrating,” he says. “His speech was very inspiring and touching, with his love for his murids splashed all over it.”

Delivering the video to Jamats in time was one challenge, but it also had to be subtitled in 10 different languages.

For the Ismaili community, such a massive translation effort was a first. Videos of momentous Imamat occasions had been turned around quickly for the global Jamat in the past, notably the Inaugural Ceremony of Mawlana Hazar Imam’s Golden Jubilee on 11 July 2007. But never before had subtitles been added — even in one language, let alone 10.

An array of people worked tirelessly to make it happen. The video team consisted of 10 people, including directors, camera operators, and editors. Five camera operators filmed the ceremony, with direction and editing taking place in a live control room. The live-edited video was then combined with the pre-produced opening and other features to provide the Jamat with an even better understanding of the evening, and the story behind it.

Speeches were quickly transcribed and reviewed before being sent to translators around the world. Once the final video was completed with its English audio, the team worked into the hours of the night to add subtitles in Arabic, Dari, English, Farsi, French, Gujarati, Portuguese, Russian, Tajik, and Urdu.

After approximately 20 hours of continuous and demanding work by the team, the entire global Jamat had received videos in their relevant languages. The impact was felt in Jamatkhanas around the world, where screenings were already underway.

“That the Jamat in Iran could view the film at the same time as the global Jamat, so quickly after the event, and in subtitles was a unique and unprecedented experience,” says Nacim Pak-Shiraz, who served as a translator and liaison with the musicians. “This shared experience, without language barriers, created a sense of connectedness with the global Jamat and being part of one community.”

The hard work and dedication of all the organisers and volunteers, whose tireless efforts helped make the celebration of Mawlana Hazar Imam’s birthday a success, was rooted in the historic tradition of loving and devoted service by the Jamat for the Imam of the Time. 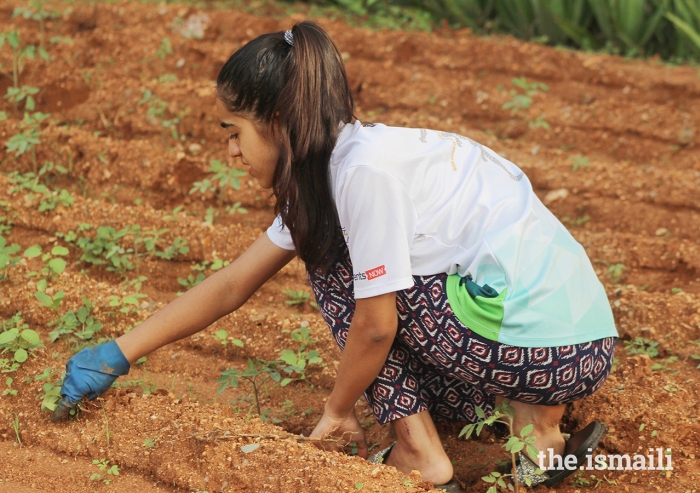