About the Ismaili Centre, Lisbon

Beginning in the 1970s, Portuguese Ismailis created places of gathering for cultural and social purposes in major cities and towns where they settled. They also found office space for the establishment of philanthropic organisations that they sponsored. As they developed and expanded, these organisations involved increasing numbers of institutional partners and the wider Portuguese public. 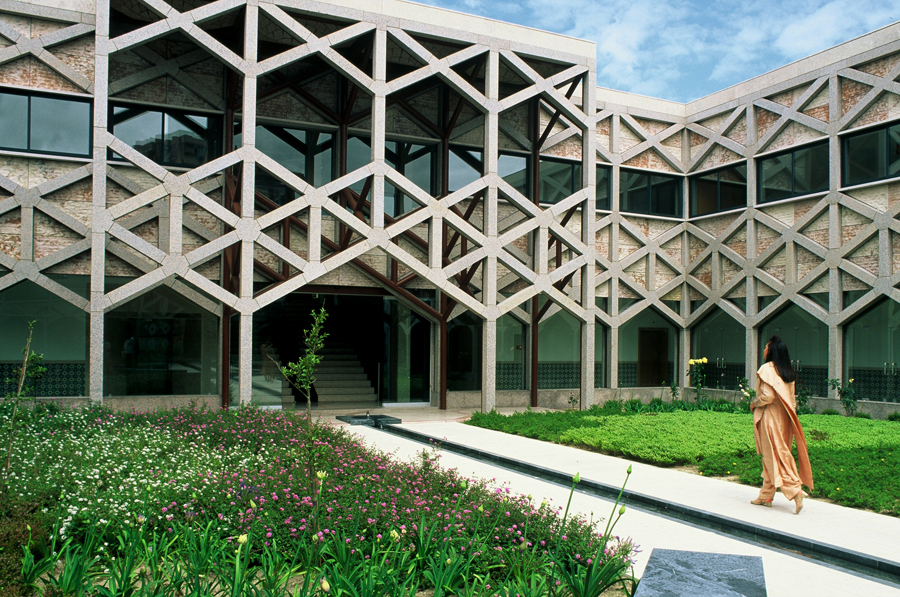 A woman walks along a watercourse in one of the flourishing inner courtyards. Gary Otte

In order to meet the growing needs of institutions and the Ismaili community itself, a permanent and comprehensive facility was acquired in 1986. The site, in the prime location of Palma de Baixo, in close proximity to prominent universities and principal hospitals in Lisbon, is easily accessible to all parts of the city.

There followed considerable reflection over the most effective way of using the site to meet the community's institutional objectives and to contribute to social, cultural and economic development in Portugal. Eventually, a team of architects, led by Raj Rewal of New Delhi and Frederico Valsassina of Lisbon, was commissioned to prepare the plans for a centre which had to meet a challenging architectural design brief.

In December 1996, President Jorge Sampaio laid the Foundation Stone of the Centro Ismaili in the presence of Mawlana Hazar Imam and other distinguished guests, senior government officials and the Mayor of Lisbon, Joao Soares. Describing the contribution that he saw the building making, President Sampaio observed that “the future Ismaili Centre will be an important element in the permanent dialogue amongst cultures, a place of encounter between civilisations, of discussion of ideas, and of serene and mutually enriching debate on the great problems that are of legitimate and equal concern to all.”

One-and-a-half years later, on 11 July 1998, President Sampaio and Mawlana Hazar Imam returned to the site for the Opening Ceremony of the Ismaili Centre, Lisbon.